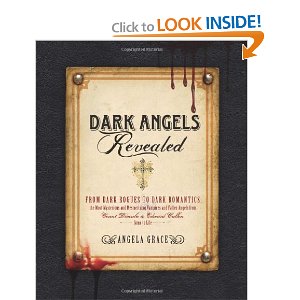 From Bill Compton of True Blood to Edward Cullen of the Twilight series to Count Dracula of Bram Stoker’s classic novel, fans are enraptured by heaven’s mysterious and misunderstood outcasts. Now

comes the ultimate fan guide for lovers of the dark angel genre.

The Ultimate Fan Guide to the Dark Angel Phenomenon!

Dark Angels have a way of capturing the popular imagination. From Lestat of The Vampire Chronicles to Edward Cullen of the Twilight series to Count Dracula of Bram Stoker’s classic novel, fans are enraptured by heaven’s mysterious and misunderstood outcasts. Now comes the ultimate fan guide for lovers of the Dark Angel genre. Dark Angels Revealed highlights the most popular Dark Angels from novels, movies, and television including:

— Spike from Buffy the Vampire Slayer

Each entry is a revealing look into a Dark Angel’s strengths, weaknesses, and special powers. Even the most diehard fan will glean new insight into each character’s psyche, gifts, and personal demons. Brimming with photographs, key lines and scenes, and little known facts and trivia, Dark Angels: A Complete Illustrated Guide is the definitive insider’s guide to these supernatural creatures.

If you are a big Vampire fan, and let’s face it, who isn’t these days, then you will be fascinated by this book. Dark Angels Revealed contains a brief history about over 40 of the most famous fictional blood suckers over the last century. While many new vamp fans may only know Edward Cullen, Bill Comptom and the like, there were many other vampires around who didn’t sparkle and you wouldn’t want to snuggle up to.

Each section is quite interesting to read how the mythology of these creatures of the night has changed or been modified to suit the author and creator of each legendary character. While I prefer the older, more traditional rules that vampires were bound by, some of the newer characters have an element that make them comparable to the initial vampire creations. The addition of pictures, quotes and interesting tid bits make this book a tome worth having if you love the genre and not just the most recent few vamps.
Posted by Scott Wilson at 12:52 AM