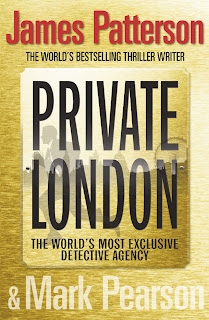 Dan Carter is the head of the London office of Private, the world’s largest and most technologically advanced investigation agency. Jack Morgan, Private’s owner and CEO, put his faith in Carter, and has entrusted him with some of their most important cases.

None more important than Hannah Shapiro. The daughter of one of Private’s wealthiest and most valuable clients, Hannah and her mother were kidnapped when she was thirteen years old. Hannah survived; her mother didn’t. Hannah is now in London studying at one of the most prestigious universities in England, and it is Carter’s job to protect her. But the unthinkable happens as Hannah is kidnapped for the second time in her young life.

Carter has all of Private’s extensive global resources at his disposal to use in the investigation of this kidnapping. But as time progresses and no word is received from the kidnappers, fears for Hannah’s safety mount. Recently there has been a string of unsolved murders involving young women. Carter is praying that Hannah is not another link in this particular chain.

Private London is the latest co-written book by James Patterson. I’ve never heard of the other author, Mark Pearson, before, but could kind of tell which chapters he wrote, which seemed to be more than Patterson in this book.

The book is about a young woman, Hannah Shapiro, who narrowly escaped a horrible death in LA by being saved by the head of Private International, Jack Morgan. The link here is that Shapiro is the daughter of Private’s wealthiest clients. Soon after, Shapiro moves to London where she lives a pretty normal life for the next 8 years.

From here the story continues along quite quickly with the two page chapters flying past faster than you can imagine. I read this book in only an evening.

If you are a Patterson fan then you will probably enjoy this one as well.
Posted by Scott Wilson at 2:01 AM