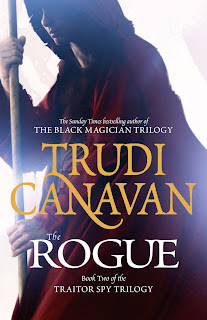 Living among the Sachakan rebels, Lorkin does his best to learn about them and their unique magic. But the Traitors are reluctant to trade their knowledge for the Healing they so desperately want and, while he assumes they fear revealing their existence to the world, there are hints they have bigger plans.

Sonea searches for the rogue, knowing that Cery cannot avoid assassination for ever, but the rogue's influence over the city's underworld is far greater than she feared. His only weakness is the loss of his mother, now locked away in the Lookout.

In Sachaka, Dannyl has lost the respect of the Sachakan elite for letting Lorkin join the Traitors. The Ashaki's attention has shifted, instead, to the new Elyne Ambassador, a man Dannyl knows all too well. And in the University, two female novices are about to remind the Guild that sometimes their greatest enemy is found within.

Trudi Canavan lives in the Melbourne suburb of Ferntree Gully. As well as writing fantasy, she works as a freelance designer and illustrator, and is Art Director for an Australian SFF magazine.

The Ambassador's Mission, The Magician's Apprentice, The Novice, The Magicians' Guild, The High Lord, Priestess of the White

The Rogue, the second book in Trudi Canavan's Traitor Spy Trilogy, picks up right where The Ambassador's Mission left off. I thoroughly enjoyed this book despite a slightly slowish start and found myself myself drawn in and getting to the last page surprisingly quickly. A great second book to the series and I look forward to the concluding novel Traitor Queen

The novel and series are full of magic and mystery in a fantasy realm. In this book really I enjoyed the journey back to the Magicians and Theives guilds, with some favourite characters like Cery popping up along the way.

If you're new to the series, I'd recommend reading the first book in the Magicians series and following the series to this book in the later Traitor Spy series, or you won't get the full effect of this book. Just like most series, reading a middle book without reading the initial ones won't give you a great read. You could just read Book 1 in the Traitor Spy Trilogy, but I'd recommend starting at Book 1 in the Magicians Guild series and working your way to this book, for a full enjoyment of all the books.

If you have been following both series, and enjoyed them, then you'll probably love this book too.
Posted by Scott Wilson at 11:29 PM