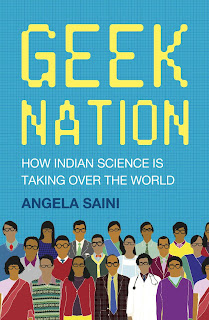 The fascinating story of how India is transforming itself into a global science superpower.

India: it's a nation of geeks, swots and nerds. Almost one in five of all medical and dental staff in the UK is of Indian origin, and one in six employed scientists with science or engineering doctorates in the US is Asian. By the turn of the millennium, there were even claims that a third of all engineers in Silicon Valley were of Indian origin, with Indians running 750 of its tech companies.

At the dawn of this scientific revolution, Geek Nation is a journey to meet the inventors, engineers and young scientists helping to give birth to the world s next scientific superpower a nation built not on conquest, oil or minerals, but on the scientific ingenuity of its people. Angela Saini explains how ancient science is giving way to new, and how the technology of the wealthy are passing on to the poor. Delving inside the psyche of India s science-hungry citizens, she explores the reason why the government of the most religious country on earth has put its faith in science and technology.

Through witty first-hand reportage and penetratrive analysis, Geek Nation explains what this means for the rest of the world, and how a spiritual nation squares its soul with hard rationality. Full of curious, colourful characters and gripping stories, it describes India through its people a nation of geeks.

Born in the UK in 1980, Angela Saini is a science journalist and reports for the BBC, New Scientist, Wired and the Economist. She was named European Young Science Writer of the Year in 2009, and in 2008 won a European television news award.

Geek Nation is a rich and captivating explanation of the evolution of Indian science in many fields and of the conflict between science, modernity and traditional society. Saini travels India in search of stories of the modern science such as biology, genetics, IT, nuclear power, agriculture, and how India is making great leaps forward.

It was quite interesting to see how such a large country often seen as a third world nation, has become such a Geek Nation. There are now a high number of qualified scientists and it is quite cheap to conduct the research and production of technology in India compare to the rest of the world. This is no journey of mere curiosity, but a quest for some answers as to how much science can help solve India's huge problems of corruption, poverty, inequality, power shortages, food shortages and related issues.

A very interesting read about a booming industry in an unlikely country.
Posted by Scott Wilson at 10:20 PM