BOOK REVIEW: How to Draw Vampires: Discover the secrets to drawing, painting, and illustrating immortals of the night (Fantasy Underground) 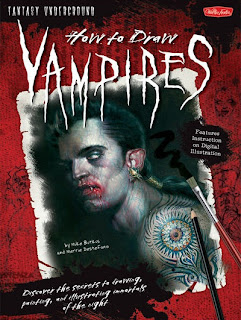 Title: How to Draw Vampires: Discover the secrets to drawing, painting, and illustrating immortals of the night (Fantasy Underground)

Over the years, vampires have earned a permanent place in pop culture. Numerous movies, TV shows, and book series have only upped the demand for these mythological beings. And now anyone can learn to draw and paint vampires with this in-depth handbook. How to Draw Vampires covers everything from rendering sharp fangs and glowing eyes to creating stylish immortal fashion. The book also contains 15 step-by-step projects featuring a mix of pencil, paint, and digital image-editing instruction, allowing artists to replicate each scene in graphic detail. Evil vampires, handsome vampires, gothic lairs, and the forbidden love between human and vampire merely scratch the surface of subjects in this must-have title.

Michael Butkus, one of the top entertainment illustrators and concept artists since 1986, has been involved in the advertising and production of more than 1,500 films and series. For the last 14 years, he has worked on countless film and television projects and received numerous awards for his striking visuals. Mike's studio is located at Associates In Art Art in Sherman Oaks, CA.

Merrie Destefano left a 9-to-5 desk job to become a full-time freelance editor and novelist, writing science fiction and fantasy. With 20 years of experience in publishing, her background ranges from award-winning graphic designer and illustrator to editor of Victorian Homes magazine and founding editor of Cottages & Bungalows magazine. She currently lives in Southern California with her husband, their German shepherds, and a Siamese cat.

This series of books is fantastic. I really like the lessons and instructions you can learn from the book and the way the author has set it out.

Join us on another journey to The Fantasy Underground, a land where legends twist and turn like a medieval cobblestone street. In this volume, you’ll meet the rock star of monsters: the vampire. From the 18th-century vampire frenzy in Eastern Europe to the gypsy legends of ancient India to the vampire hunters in the Carpathian Mountains, you’ll discover the folklore and history of this immortal creature—and how he was transformed from a ghoulish demon into a romantic charmer. Renowned entertainment illustrator, Michael ButkUs, and urban fantasy author, Merrie Destefano, lead the expedition through Romania, Transylvania and around the world, revealing how you can create your own undead beast. You’ll discover how to capture the vampire in pencil, acrylic and oil, in a variety of illustration styles from realistic to anime. You’ll also learn how to take your illustrations and paintings and manipulate them on the computer. Projects include a provocative vampire slayer, a romantic teenage vampire and a deadly flying vampire—captured in the midst of transformation. But there is one thing you should remember. Vampires have waited centuries for this day, when they would be resurrected by the fresh blood of fans around the world. And they’d love to add you to the menu.

Learn how to create your own legion of the undead. All the information, inspiration, and instruction you need is inside.
Posted by Scott Wilson at 1:11 AM