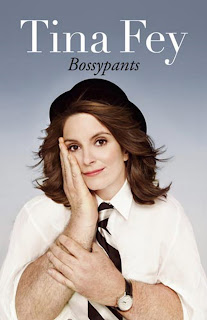 Tina Fey is one of the world's greatest comic writers and performers. Bossypants is her first book.

Once in a generation a woman comes along who changes everything. Tina Fey is not that woman, but she met that woman once and acted weird around her.

Before 30 Rock, Mean Girls and 'Sarah Palin', Tina Fey was just a young girl with a dream: a recurring stress dream that she was being chased through a local airport by her middle-school gym teacher. She also had a dream that one day she would be a comedian on TV. She has seen both these dreams come true.

At last, Tina Fey's story can be told. From her youthful days as a vicious nerd to her tour of duty on Saturday Night Live; from her passionately halfhearted pursuit of physical beauty to her life as a mother eating things off the floor; from her one-sided college romance to her nearly fatal honeymoon -- from the beginning of this paragraph to this final sentence.

Tina Fey reveals all, and proves what we've all suspected: you're no one until someone calls you bossy.

Tina Fey was the first female head writer of Saturday Night Live and created, writes and stars in 30 Rock. She has received numerous awards for her comedy writing, including the Mark Twain Prize for American Humor, 5 Emmys, and 5 Writers Guild Awards. She also wrote and appeared in the acclaimed and wildly popular movie Mean Girls.

I’d never heard of Tina Fey before I first saw 30 Rock this year. Now I’m hooked on the program and her strange sense of humour. The book is very much like the series with the same humour scattered throughout the tales Fey tells of her life.

Fey’s autobiography recounts many of the hilarious events in the life of a brilliant comic mind, who has been involved in many successful shows, such as 30 Rock, Saturday Night Live and Mean Girls. I can honestly say that there wasn’t a single page in her autobiography that I didn’t get at least one laugh out of.

Bossy Pants is one of the funniest autobiographies I have ever read.
Posted by Scott Wilson at 1:15 AM