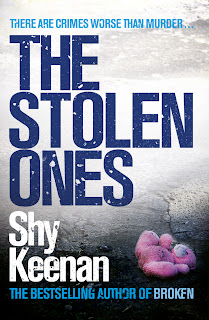 Title: The Stolen Ones

Hard-hitting crime fiction from the author of BROKEN.

The children are sending her messages...

Cordelia was horrifically abused as a child. Now she is helping the police with their enquiries into a frightening internet paedophile ring.

But when she recognises that a child in a live film is sending out silent messages that only she can understand, she makes it her mission to track down the rapists, and the innocents they are abusing.

Before it's too late.

Shy Keenan founded Phoenix Survivors to campaign for justice for victims of sexual abuse and to rescue children at risk. Her work has been recognised by the British government as a crucial part of the battle to protect children. She lives with her family in the countryside.

The Stolen Ones is a fast paced and emotional crime novel by author Shy Keenan. With the topic of internet paedophiles and their disgusting inner sanctum, the book is bound to touch raw nerves with anyone with a view on these despicable characters. I found the writing very moving and the characters easy to feel for, apart from the antagonists, who you just wanted to deal with yourself.

With the added element of the MC being able to recognise a silent message in a live film, this book is a real rollercoaster of emotions.
Posted by Scott Wilson at 10:42 PM