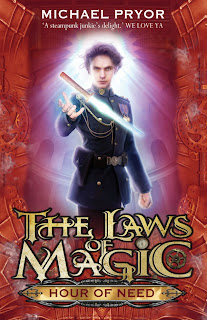 The earth-shattering final book of the LAWS OF MAGIC series!

Aubrey Fitzwilliam, renegade and traitor. Instead of clearing his name in Albion, Aubrey has chosen to pursue his enemy, Dr Mordecai Tremaine, deep into the heart of enemy territory. What he uncovers about Dr Tremaine's plans promises to change the course of the war and the future of humanity itself. A hideous combination of electrical science and soul-shattering magic is bringing the world far closer to the edge of the abyss than anyone apart from Aubrey realises.

Aubrey must risk everything, or there'll be no world left to save.

PRAISE FOR LAWS OF MAGIC 5:

* 'The Laws of Magic are a steampunk junkie's delight.' Natlie Hatch, weloveya.wordpress.com

* 'Fans won't be disappointed as Pryor's storytelling continues to deliver. Yes there is magic between the covers of this book.' thereadingstack.blogspot.com

* 'Political intrigue and adventure abound in this tale of high adventure with plenty of wit and a touch of romance … readers will enjoy it for its intelligence, humour and first class storytelling.' FICTION FOCUS

* 'Like its predecessors it is a clever blend of wry humour, action and intrigue. With parallels with real-world history, likeable characters and an absorbing plot, this is fantasy as it should be done … Great stuff for teens and adults.' Sally Murphy, aussiereviews.com

Michael Pryor’s Laws of Magic, Hour of Need the sixth and last book set in a fantasy world reminiscent of the pre-World War 1 era of our own history. Typical to a steampunk novel the world has added magic and steampunk technology. Each novel in this series picks up from where the previous book left off, so it’s best to read these novels in order.

Hour of Need begins with Aubrey Fitzwilliam, the protagonist of the series, in hostile territory, spying on his enemy, Doctor Mordecai Tremaine, a powerful sorcerer bent on achieving immortality at the cost of thousands of innocent lives. After discovering just how terrifying Tremaine’s plans are, Aubrey and his friends embark on a perilous mission to stop him, which sees them confront – among other dangers – front-line trench warfare and an aerial dirigible battle.

This is a nice tidy closure to a brilliant series and I highly recommend it if you’ve enjoyed the previous five books.
Posted by Scott Wilson at 10:07 PM