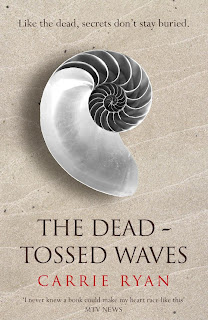 Return to Mary's world in the stunning new novel of dread and hope from international bestseller Carrie Ryan.

Gabry lives a quiet life, secure in her town next to the sea and behind the Barrier. She's content to let her friends dream of the Dark City up the coast while she watches from the top of her lighthouse. Home is all she's ever known and all she needs for happiness.

But life after the Return is never safe and there are threats even the Barrier can't hold back.

Gabry's mother thought she left her secrets behind in the Forest of Hands and Teeth, but, like the dead in their world, secrets don't stay buried. And now, Gabry's world is crumbling.

If Gabry is to have any hope of a future, she must face the forest of her mother's past...

Born and raised in Greenville, South Carolina, Carrie Ryan is a graduate of Williams College and Duke Law School. THE FOREST OF HANDS AND TEETH is her first novel. A former litigator, she now writes full-time. She lives with her writer/lawyer boyfriend and two fat cats in Charlotte, North Carolina.

Dead Tossed Waves is a brilliant sequel to Carrie Ryan’s first zombie novel, The Forest of Hands and Teeth. It is a great example where the sequel is even better than the first instalment.

I really enjoyed this story so much more than the first book, as I feel Carrie Ryan truly displayed growth in her writing abilities, as evidence by the captivating plot she devised, the flawed yet appealing characters she developed, and the intriguing setting she used as a backdrop.

I liked all of the characters that made up this adventure including Gaby, Catcher, Cira, and Elias, who I felt were strong, complex players in this story that kept the action going at a steady pace. It was interesting to learn about the Soulers and the additional back-story of the Return.

Zombie novels are my favourite books and this series looks like will be a brilliant series that I will be following closely.
Posted by Scott Wilson at 11:08 PM