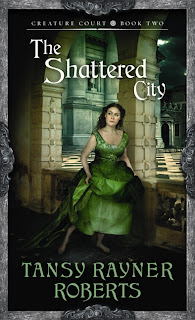 She could hear that laughter again, and for a moment Velody was confused, not sure which dead man was mocking her.

Velody now holds the leadership of the Creature Court. The unsteady alliances within the Court are beginning to fracture, as a series of murders and disappearances throw suspicion on one of their own. A

shiol finds Aufleur′s many festivals frivolous, until a major one is cancelled. Unease grows. It seems nothing can save the city from a massacre ... nothing but the ultimate sacrifice from one of the Creature Kings.

Praise for Power and Majesty

′a richly decadent world ... far too morish to be good for anyone′s sleeping patterns′ ASIF

′a quite extraordinary flight of imagination′ AurealisXpress

′a silky and sophisticated new entry to Australian fantasy′ Bookseller+Publisher

The Shattered City is the second book in the Creature Court serries following on from Power and Majesty. As with most books in a series, you really need to have read the first book to fully enjoy all of the details and storyline in this sequel by Tansy Rayner Roberts.

In this dark fantasy there are shapechangers who guard the city of Aufleur day by day from supernatural attacks. Seeing the consequences that the Velody is having on the Creature Court, the forces that seek to annihilate Aufleur plan for a different approach to take advantage of this situation. As the separation between the nocturnal world of the Creature Court and the daytime world of the city begins to unravel, Velody has to struggle to protect her friends from her strange subjects.

This book is a great follow on for Power and Majesty and I recommend you read it first.
Posted by Scott Wilson at 12:36 AM