BOOK REVIEW: The Woman Who Murdered Babies for Money 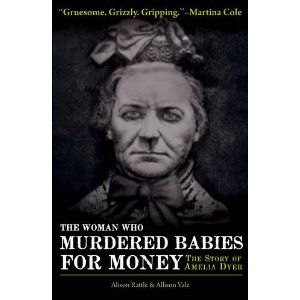 Title: The Woman Who Murdered Babies for Money

The life and true crimes of Amelia Dyer, who was the most prolific babyfarm murderer of Victorian

As well as relating the story, the authors explore the circumstances that enabled such crimes to be committed. Unregulated “adoption” was a widely acknowledged problem. The Child Protection Act did not yet exist. In Mrs. Dyer's case, though, such shameless profiteering did not, ultimately, go unpunished: the police finally located Mrs. Dyer, kept her under surveillance and then mounted a "sting" operation, using a young woman to pose as a potential customer. Amelia Dyer was arrested when she opened her front door to find two policemen on her doorstep. Finally confessing, she said, "You'll know all mine by the tape around their necks." She was hanged in 1896.

The Woman Who Murdered Babies for Money is the true account of Amelia Dyer, the murderous baby farmer of Victorian England. While the events of Dyer are over one hundred years old, the book is based on eye witness accounts, court documents, newspapers, hospital records, and journals.

As well as the story of sadistic Dyer, there are also indepth details of of the workhouses, asylums and life in the late 1800’s. There are also images of the ads that unsuspecting parents saw, thinking that they had found a safe and secure home for their newborns. The cold heartedness of Dyer is seen in her calculated plan to draw in parents, get the babies and then send bogus letters to the parents, leading them to believe that their babies were happily adopted out to good homes.

It is horrific to think that such a sadistic serial killer could keep this scheme going for years before being caught.
Posted by Scott Wilson at 9:50 PM