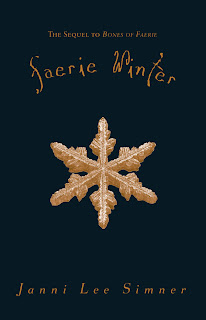 Here at last is the sequel to BONES OF FAERIE, for all those fans of dark fantasy and dystopian adventure who thrilled to Janni Lee Simner's unique vision of a postapocalyptic world infused with magic.

The war has been over for 40 years, and finally Liza's town is accepting children born with fairy talents. Then a nearby town is destroyed, and Liza discovers that the war might not be over after all. It seems some faeries survived and have crossed over into the human world to continue the fight. And the most powerful and merciless of them all-the Queen herself-may be among them...

Liza is a Summoner. She can draw life to herself, even from beyond the grave. And because magic works both ways, she can drive life away. Months ago, she used her powers to banish her dangerous father and to rescue her mother, lost in dreams, from the ruined land of Faerie.

Born in the wake of the war between humanity and Faerie, Liza lived in a world where green things never slept, where trees sought to root in living flesh and bone. But now the forests have fallen silent. Even the evergreens' branches are bare. Winter crops won't grow, and the threat of starvation looms. And deep in the forest a dark, malevolent will is at work. To face it, Liza will have to find within herself something more powerful than magic alone.

Born in the wake of the war between humanity and Faerie, Liza lived in a world where green things never slept, where trees sought to root in living flesh and bone. But now the forests have fallen silent. Even the evergreens’ branches are bare. Winter crops won't grow, and the threat of starvation looms. And deep in the forest a dark, malevolent will is at work. To face it, Liza will have to find within herself something more powerful than magic alone.

‘An incredible sequel to one of my very favourite books.’ Aprilynne Pike, number-one NEW YORK TIMES bestselling author of WINGS

‘This book has one of the best first chapters I know - and the rest of the book more than lives up to its promise. Pure, stunning, it is impossible to put down or forget.’ Jane Yolen, winner of the World Fantasy Award

‘With its dark, sharply imagined world, this will appeal to readers of Holly Black and Cassandra Clare.’ KIRKUS

‘The plotting is strong, and readers will want to stay with Liza until her questions are resolved.’ PUBLISHERS WEEKLY

‘The mood is strikingly dark, and questions regarding mankind's tendency toward suspicion and xenophobia will loom large in readers' minds.’ BOOKLIST

‘The faerie elements blend seamlessly with the post-apocalyptic setting, and the resulting fantasy and science fiction hybrid will easily appeal to both audiences.’ THE BULLETIN OF THE CENTER FOR CHILDREN’S BOOKS

‘ . . . think of it as a cross between a Neil Gaiman fairy tale and apocalyptic fiction.’ THE POISONED PEN

‘Simner perfectly captures the sense of danger with her stark prose and ratchets up the tension as readers slowly begin to unravel the terrible truth of what happened to the land of Faerie during the war. The characters are well drawn, and the resolution is deftly handled, being both satisfying and firmly grounded in Liza's emotional reality. Fans of Lois Lowry's . . . THE GIVER will thoroughly enjoy this novel.’

Janni Lee Simner's book Faerie Winter is the sequel to the post apocalyptic fantasy Bones of Faerie. BONES OF FAERIE was more of Liza's, the narrator, coming of age in an America ravaged by magic from a past war between humans and the faerie. She also had to deal with her deepest fear: magic, especially since her overbearing father shunned anyone who was born with any magical potential, including her own sister. But the truth was that every child born after the War had some type of power, including Liza herself.

The world in this series is dangerous, plants draw blood, creatures can attack on whim and it is filled with magic and mythical creatures. Liza has come to terms with her magic, the ability to compel people and animals with her voice. She uses this ability with her friend Matthew, who can transform into a wolf, to help the lingering dead cross over. She has learned that not all faerie are evil.

Dystopian themes along with stories featuring faeries can grow weary. They are so popular right now that we’ve seen dozens upon dozens of similar stuff produced, each trying to be more clever than the next to make their world a different shiny, unique butterfly. But what makes Ms. Simner’s world so compelling to me is that she doesn’t try. She doesn’t try to beat you over the head to show you how awesome and unique her world is. There’s such a subtlety in her writing and an effortlessness in the way everything is weaved together that you sink in and simply become immersed in it.
Posted by Scott Wilson at 10:37 PM