BOOK REVIEW: Animals Real and Imagined: Fantasy of What Is and What Might Be 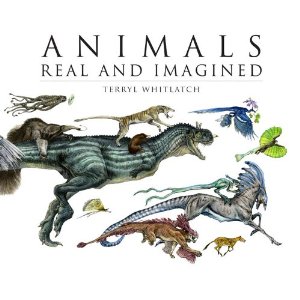 Title: Animals Real and Imagined: Fantasy of What Is and What Might Be

A fantastic visual voyage into the world of animals, both real and imagined. There is no end to the diverse and unique creatures that Terryl Whitlatch creates for us with her solid knowledge of anatomy and boundless imagination. Especially intriguing are the 100s of anatomical notes that are dispersed among her sketches, educating and enlightening us to the foundation of living bodies and their mechanics.

Terryl Whitlatch is an accomplished, scientific and academically trained illustrator who extensively studied vertebrate zoology and animal anatomy. She has worked for various zoos and museums in the US and The World Wildlife Fund as Senior consultant for Wildlife Art and Animal Anatomy. She is considered to be one of the top creature designers and animal anatomists working in the field today

In a career spanning over 25 years, Terryl has many projects to her credit, including Star Wars: The Phantom Menace, Star Wars: The Special Edition, Jumanji 1 and 2, Men in Black, Brother Bear, Dragonheart, Alvin and the Chipmunks, Curious George, The Polar Express, and Beowulf. For over seven years, Terryl worked for Lucasfilm Ltd., Industrial Light & Magic and George Lucas' JAK Films. Her unique combination of illustration skills and comprehensive knowledge of animal anatomy and movement are essential components in the design, anatomy and physical animation aspects of believable creature creation.

In her work on Star Wars Episode I: The Phantom Menace, she worked directly with George Lucas for whom she designed countless creatures for the films and related products, including CD-ROMs. A collection of her work for Lucasfilm, The Wildlife of Star Wars: A Field Guide was published by Chronicle Books in 2001 to critical acclaim and popular success. Terryl also designed for many electronic and interactive games for leading publishers including Steven's Spielberg's The Dig, for LucasArts.

Terryl is also the author of “The Katurran Odyssey”, volume one of a forthcoming series “The Katurran Trilogy”. In addition Terryl is involved with several other book and film concepts, as well as teaching Creature Design and Construction/Anatomy at the Academy of Art University in San Francisco, CA.

Terryl Whitlatch’s Animals Real and Imagined is a fantastic book by a renounded artist with a long list of credentials behind her. There are so many fascinating components to this book, such as the dissection of creatures with the skeleton, muscles and skin. It gives the reader an idea how to structure a fantasy creature based on the internal structure of both real and imaginary animals.

I loved the sketches, full colour pictures and details of all creatures in this book. Highly recommend this book for lovers of fantasy art.
Posted by Scott Wilson at 11:30 PM