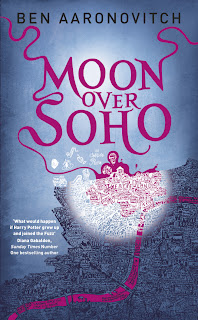 Peter Grant is not just a lowly detective Constable, he's also apprenticed to the last wizard in Britain: policing will never be the same again!

The second in the Rivers of London series of urban fantasy/police procedurals featuring Peter Grant.

'When I was a kid, it was my job to change my dad s records while he lounged around and drank tea. This is why I know my Argo from my Tempo and why, when Dr Walid called me down to the morgue to listen to a corpse, I recognised the tune it was playing as 'Body and Soul'. Not literally playing, you understand, but something violently supernatural had happened to the victim on or around his death, something strong enough to leave its imprint on his corpse as if it were a wax cylinder recording. The former owner of the body was one Cyrus Wilkinson, part-time jazz saxophonist and full-time accountant, who dropped dead of a heart attack half an hour after finishing a gig in a Soho jazz club. He wasn't the first.'

Ben Aaronovitch's work reflects his abiding fascination and love for what he modestly likes to refer to as the 'Capital of the World', where he was born and raised. He works as a London bookseller when he is not writing novels and TV scripts.

Moon Over Soho is a crime fiction novel with an urban fantasy twist. Moon over Soho gives us a much deeper look at London's magical community, such as the defunct school for magic, Nightingale's past, magical involvement in global conflicts, and a circle of dark magicians.

As in the first book, Aaronovitch's fast paced and well crafted characters, witty dialogue and sex and violence to keep you engaged throughout the story.

I can see Aaronovitch’s series being the next big thing, especially for adults who secretly like Harry Potter.
Posted by Scott Wilson at 12:19 AM