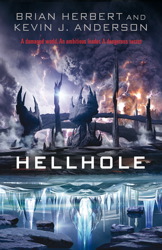 Only the most desperate would ever dare to make a new home on Hellhole, a planet ravaged by natural disasters. Persistent volcanic eruptions, destructive storms and recent damage inflicted by asteroid impact make the planet a dumping ground for undesirables, misfits and charlatans. But its location out on the wild frontiers of the Constellation, among the Deep Zone worlds, makes it the final refuge for those fleeing from the rule of Diadem Michella Duchenet - a tyrant with a sweet face, but a dark and heardened heart.

General Adolphus, the military leader exiled to the planet when he was defeated in the first revolution against the Diadem, is determined to transform Hellhole into a place of opportunity. While the colonists are diligently working to develop the planet, the General is forging secret alliances with the leaders of the other Deep Zone worlds. He dreams of turning his prison into the centre of a new coalition of planets free from the Diadem's iron grip.

Back on the decadent capital planet of Sonjeera, surrounded by corruption and consumed by the plots and feuds of the old guard nobles, Diadem Michella is confident that the General has been neutralized. She has no idea of the revolt growing in the Deep Zone . . . or does she?

But what no one knows is this: the planet Hellhole, though damaged and volatile, hides secrets of historic magnitude. Lurking beneath the surface are the remnants of an obliterated alien civilization, detailing an unrecorded past, which, if unearthed, could tear the fragile human civilization apart.

A failed rebellion. A disgraced leader exiled to a brutal backwater world. An interstellar government with a stranglehold on its people. These are the elements that lead into the opening of Hellhole, the first novel in the new science fiction epic from Brian Herbert and Kevin J. Anderson.

General Tiber Maximilian Adolphus blinked when his forces had victory within reach. That hesitation won the war for Diadem Michella Duchenet's ruler of all known habitable worlds in the Constellation. Rather than hand the rebellion a martyr figure, Diadem Michella exiled Adolphus to the most inhospitable world in the Deep Zone, Hallholme.

As a series debut it ends on the typical KJA' semi-cliffhanger familiar from the series above and I definitely plan to read the next as soon as I get it, though my hope is the authors will keep the series manageable for its depth.
Posted by Scott Wilson at 1:21 AM