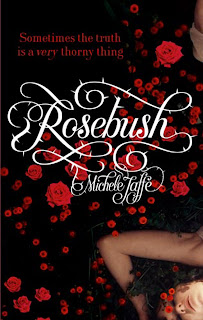 A dark, sexy psychological thriller from a fantastic new voice in YA fiction.

Jane is found, near death, in a rosebush - a victim of hit and run. But as she s convalescing she realizes that her friends stories and her memories of what happened that night aren t adding up.

And now the only thing she does know is that one of her friends isn t so friendly.

One of them tried to kill her.

Sometimes the truth is a very thorny thing. . .

Michele Jaffe is the bestselling author several adult novels, including the thrillers BAD GIRL and LOVERBOY. A native of Los Angeles, California, Michele and her sparkly shoes reside in New York City.

Jane Freeman is one of the most popular girls in school…so why did someone hate her badly enough to run over her and leave her for dead in a rosebush?

When Jane awakens, paralyzed, in a hospital bed, she has no memory of the accident or the hours before. As time passes with nothing to do but think, she begins to piece together her memories of the night she was nearly murdered—and realizes that just about any of the visitors filing into her room could be the killer. Soon she is receiving thinly-veiled threats that her mother and doctors believe are simply hallucinations caused by her injuries. But Jane knows the killer is out there, waiting for a chance to finish the job. Can she stop him/her in time.

It seems that everyone has a secret to hide and that makes them seem even more like suspects. Well almost everyone is a suspect except for my favorite character her sister Annie, who has a barbie doll that she thinks is a man trapped in a woman's body. All the clues come together and the answer to the mystery surprised me.

The beauty in this book is that Jane is slowly being driven mad but at the same time discovering important information about people she thought she knew. Jane seems to learn more about herself in the hospital room then she ever did among the popular crowd. This is a truly engrossing mystery with a flawed but beginning to change narrator.
Posted by Scott Wilson at 11:15 PM