Zombies: A Record of the Year of Infection Review 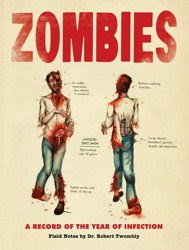 Zombies: A Record of the Year of Infection

The year is 2011, and what starts as a pervasive and inexplicable illness ends up as a zombie infestation that devastates the world's population. Taking the form of an illustrated journal found in the aftermath of the attack, this pulse-pounding, suspenseful tale of zombie apocalypse follows biologist Dr Robert Twombly as he flees from city to countryside and heads north to Canada, where -- he hopes -- the living dead will be slowed by the colder climate. Encountering scattered humans and scores of the infected along the way, he fills his notebook with graphic drawings of zombies and careful observations of their behaviour, along with terrifying tales of survival. This frightening new contribution to the massively popular zombie resurgence will keep fans on the edge of their seats right up to the very end

This is a short, diary style graphic book about life after a worldwide zombie outbreak. The journal entries of Dr Robert were quite entertaining, but unfortunately too short and too few, not in a bad way. I wanted the book to continue and was disappointed when page 144 came.

If you aren’t a big zombie fan then you won’t find anything particularly new to change your mind in this book. But if you love the genre, then you’ll find this one a good read.

The images in the book are quite graphic, so I wouldn’t leave this one on the coffee table for the kiddies to pick up, unless you want them to gain an intimate understanding of the inner workings of the human body? Overall, definitely worth a look in, excuse the pun, if you like a good zombie book.
Posted by Scott Wilson at 2:50 AM