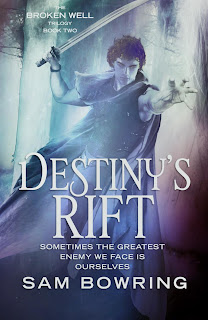 Sam Bowring
Sam Bowring lives in Sydney and is a comedian and writer. As well as creating his own stand-up routines, he has written for Rove Live (Network Ten), The Mansion (thecomedychannel), The Big Bite (Channel 7) and The Ronnie Johns Half Hour (Network Ten). He lives in Sydney, Australia.

The blue-haired man is prophesied to end the age-old conflict between the lands, but with his very soul divided in two, much remains uncertain. On the side of light, Bel sets forth on a journey to find the Stone of Evenings Mild, his only hope of reuniting with his darker half, Losara. But the Stone is lost, hidden away by an undead mage of mutable allegiance, in the lair of an insane dragon. Meanwhile Losara has his own problems. The Shadowdreamer wants him dead, but with war coming he must unite his people for the final battle. His plan is to build a weapon that is unstoppable. How can two men fulfil a fate meant for only one? Is hope lost, or is there a way to close destiny's rift?

I was lucky enough to have this book to read after turning the final page of Prophecy’s Ruin. If you’ve read the first book in the trilogy, then you will truly enjoy the second installment. The seamless continuation of the story is impeccable and a riveting read.

Sam has developed an exciting and compelling storyline to keep the tale moving along in a smooth and easy reading novel. It is easy to be drawn into the fantasy world and I really am excited to know if their souls will be united and if so what will happen with each of the lives they are living now and their love interests? Will they ever be united into the one being, will he love both women equally or see them both from different perspectives and love neither? There are just so many questions I want answered now and don’t like the fact I now have to wait for the final novel to come out. I should have waited until all three were available before starting to read this brilliant series.
Posted by Scott Wilson at 1:49 AM