The Story of Judas Priest Review 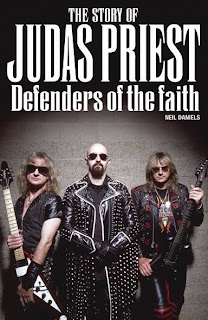 Now updated to include details of Judas Priests first ever concept album, the hugely ambitious double-disc composition Nostradamus and its preceding 18 month world tour, their Grammy Award nominations in 2009 and their fifth officially released live album A Touch Of Evil: Live and the activities of various former members.

Influenced by the legendary British blues-rock bands of the Sixties such as Cream and Led Zeppelin, the true story of Judas Priest reveals how a group of poor, working-class lads followed in their heroes footsteps.

Judas Priest's entire history is explored from their deprived beginnings in 1960s West Bromwich as an entirely different band.

From their earliest obscure demos to their controversial contract with Gull Records and breakthrough success with CBS, every album and tour is examined.

Neil Daniels is a freelance writer based in the North West of England. He currently contributes to Record Collector, Big Cheese and Fireworks Melodic Rock Magazine. He has also written for a variety of rock fanzines and websites, including Powerplay Rock Metal Magazine. This is his first book.

While writing, I often listen to my favourite heavy metal bands, Judas Priest included. The inspiration for many stories can stem back to the imagery imbedded in the back on ones psyche by legends such as Judas Priest. When I interview authors, I am just as interested in what they are listening to as what they are reading.

Neil Daniels’ book is a fantastic account of the beginnings of The Priest and is up to date with the details of their last album, Nostradamus. The lives of the band and motivations behind some of the great albums of the Priest are covered in great detail, giving the reader a glimpse at the lifestyle that most of us never even dream possible.

If you’ve read Joe Hill’s Heart Shaped Box, you’d be interested in reading the biography of a band like Judas Priest, to gain a better understanding of the main character.
Posted by Scott Wilson at 11:16 PM