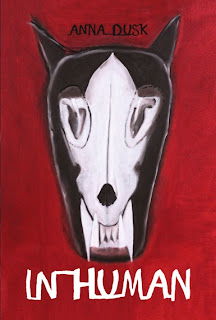 In-human is a snarling, glittering creation, a funny, yet disturbing story of transformation set in Oatlands, Tasmania. The irrepressible Sally Hunter is turning into a werewolf. As a string of killings takes place we are drawn into her sensual, visceral and highly charged world. The way she embraces her change into a powerful beast challenges us to confront our own lusts and capacities for violence, while the small town setting and the people in Sally’s world ring with a disarming truth. Dusk’s bone-deep understanding of her characters, and the chilling narrative set in motion a complex fugue of memory and confrontation that builds to a shattering climax. Described as a cross between Catcher in the Rye and Buffy, this is a heady mix of horror and reality. Dark, poignant and oddly affecting, In-human is destined to make waves and attract fans.

‘Strangely surreal and nightmarishly real – a powerful new tale for the 21st century.’
Antoni Jach , author Napoleon’s Double and The Layers of the City

‘Welcome to Oatlands, Tasmania, home of the femme-werewolf apocalypse. Sixteen-year-old Sally Hunter is seriously pissed-off and she’s turning into a powerful ‘monster dog’, a werewolf with one hell of an appetite for flesh –human or animal – and a growing sexual appetite to match. A lot of people are disappearing, gruesomely murdered or eaten, but who is responsible for all the carnage? In what frequently reads like prose poetry, Dusk imagines herself right through every aspect of the anguish of ‘transformation’ and beyond, tackling a number of taboos as she goes: menstruation, sexually violent women, cannibalism, nihilism – to name a few. Her paintings, featured in the book’s cover artwork also depict a disturbing, confronting story of the awakening of what lies within. She’s been inside the guts and psyche of ‘the beast’ and portrays its heightened sensory perceptions, its lust for the kill, its pain, its joys, its dreams. There are moments of distilled beauty and home truths here but this is no simplistic, pretty coming of age story. Horror fans accustomed to dark humour and unrelenting rampages of gore should enjoy but the squeamish, those offended by details of bodily functions, graphic violence, sex or obscenities, probably won’t.’
Paula Grunseit, Bookseller & Publisher February 2010

Anna Dusk lives in Melbourne, Australia. She grew up in the Midlands, Tasmania.


Scott – Hi Anna, congratulations on the publication of your new novel In-Human. Can you tell us a bit about the story?

Anna – Thank you Scott. It’s about a teenage girl who becomes a werewolf. Straight away she’s turning into one and then the story continues through the next six months, ending on New Year’s Eve down the docks in Hobart.

Scott – Your story is set in Tasmania, did you grow up there?

Anna – Yeah I did - I grew up in the Midlands where all the main characters live.

Scott – What does the typical writing day involve for you and how do you fit it in with your full time job?

Anna – I don’t fit it in very well at all. Hard to say why this is. I mean it is frustrating and difficult always trying to balance art with day-to-day jobs and especially with paid work but at the same time I think there’s something bigger going on with the novel I’m currently writing. I often avoid it, and when I do get to sit down to write it’s for short amounts of time only. Even if I’m lucky enough to have a whole day I’m getting up and moving about continually. It took a long time for me to find the voice, and I only just got a deeper, essential understanding of the main character. This is after six years. So at the moment how I’m seeing this is I’m writing about fear as opposed to anger, or rage, which was the main emotion in In-human. Anger propels you forward, fast, and fear does the opposite – it paralyses. It’s the emotion I’m least comfortable with but at the same time I’m really curious about whether I can pull it off. You know, I want to write a scary novel that keeps the reader awake at night, that gets them to look over their shoulder at something they thought they might have seen.

Scott – How hard was it to get your first novel published, tell us a little about the process you went through.

Anna – It was extremely hard. I started sending In-human out to publishers eight years ago, with the help of recommendations from the amazing teacher and writer Antoni Jach. I’ve always had a few fans but it was continual rejection till a publisher came into the bookshop I work in and listened to my pitch, then came back a few months later to ask to read In-human, saying he’d kept thinking about werewolves. A year on the publishing deal had fallen apart because he’d left his job. Then Antoni put me on to Text and they held on to it for a while, got me to make a major change and then said no. I tried all the publishers and agents I could, haphazardly, desperately, sadly and only very occasionally towards the end. Finally I gave up on the idea, thought I’d somehow latched on to someone else’s dream and got it all totally wrong, my life etc, but then my friend, who’s also a horror writer, Clinton Green made me a website and I sent In-human out one more time via a link to Transit Lounge, again on Antoni’s suggestion. They said yes, even though they did not publish horror at the time but more memoir and travel - how strange - and they’re in the suburb next to where I live – which is strange also...Just recently Barry Scott (the publisher) told me he liked horror movies.

Scott – You did the cover art for you novel, how hard was it to get your first book published with your own artwork?

Anna - In-human was actually, right up to the last moment, going to be an illustrated novel. Now that would’ve been amazing to achieve! I see In-human as a fairy tale – it’s a simple story but also goes deep, you can read it whichever way you like, and it re-reads well. Well I’ve been able to read it many, many times and always with enjoyment. I also mucked around visually with the text a fair bit. So illustrations, for me, are very appropriate. I love the other meanings that come from the images, and how they’re quite contemplative. Anyway, my vision was not fully realized, and I was very disappointed. In retrospect I understand now how lucky it is to have my artwork on the cover even. I was not involved in the design and was both shocked and amazed at what Barry Scott and Peter Lo came up with. I loved it immediately and think it reflects a deep understanding of the novel. It’s also been fascinating seeing people’s reaction to the period painting – when I was signing at the launch I reckon half wanted me to sign on the page next to this image and the other half wanted the signature on the next page.

Scott – Did you start off writing short stories or get straight into working on a novel?

Anna – I’ve never been able to write a short story. I wish I could. I started writing poetry and then I wrote a novel, which wasn’t horror but did move beyond the physical world – looking back on it I can see now I was edging into the supernatural. When I started writing In-human I knew this was it, that horror was what I was meant to write. It is my calling. I feel like my writing has the potential to soar when I write horror.

Scott – Have you started on your next novel yet, and if so, what is it about?

Anna – I’m maybe halfway through the next novel – it’s written in the voice of the antagonist of In-human. She is the leader of the pack and is more sophisticated and in the know than Sally. Predatory. She retells the story from her point of view and it is totally different. The story has become much bigger and a whole lot weirder. I’m finding out where werewolves come from and why they’re here.

Scott – What are you reading at the moment?

Anna – I’m reading H.P.Lovecraft. He’s the only writer who’s got me up screaming in the middle of the night. Whatever he was writing about in The Call of Cthulhu was in the room that night with me. I find it hard to read novels and even watch movies sometimes when I’m writing – it’s like I don’t want someone else’s story in my head unless their language somehow fits in with mine. I love the words Lovecraft uses, how he uses them and how out of the two fear emerges. He’s inspirational and his style is very much creeping into mine, which I’m pretty happy about. I’m also reading The Ghost Poetry Project by Nathan Curnow. He went around Australia visiting ten haunted sites, staying the night at them, and then writing these poems.
Posted by Scott Wilson at 4:52 AM