Plague of the Dead: The Morningstar Saga Review 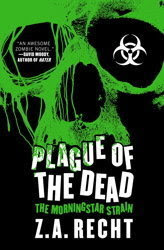 Plague of the Dead: The Morningstar Saga

Description
THE END BEGINS WITH AN UNPRECEDENTED VIRAL OUTBREAK:
Morningstar. The infected are subject to delirium, fever, violent behavior...and a one hundred percent mortality rate.
BUT THE END IS ONLY THE BEGINNING:
The victims return from death to walk the earth. When a massive military operation fails to contain the plague of the living dead, it escalates into a worldwide pandemic.
NOW, A SINGLE LAW OF NATURE DOMINATES THE GLOBAL LANDSCAPE:
Live or die, kill or be killed. On one side of the world, thousands of miles from home, a battle-hardened general surveys the remnants of his command: a young medic, a veteran photographer, a brash private, and dozens of refugees -- all are his responsibility. While in the United States, an army colonel discovers the darker side of Morningstar and collaborates with a well-known journalist to leak the information to the public....
Review

Another good zombie novel in the same journal type format as many others around. The big differenct with this novel is that the zombie’s aren’t actually zombies until you kill them. The virus turns the victims into mindless, aggressive killers similar to 28 days later. Once they are killed, they reanimate as the more traditional type zombies, slow from rigor mortis, but no less relentless.


Fair warning: This is a very gruesome book with explicit zombie sequences. It is not as subtle as some of the other zombie novels in the market at the moment and probably won’t appeal to some readers due to the graphic nature of the writing. Not for the faint of heart. Or appropriate to read during a meal.
There were a lot of extensive descriptions of firearms and other weapons and less character development as some other zombie books, so it’s aimed at a different market really. I still enjoyed it because, well it had zombies in it.
Posted by Scott Wilson at 4:14 AM