The Chamber of Shadows Review 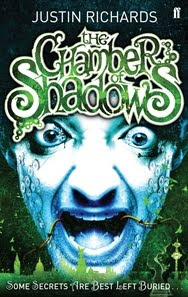 November, 1886: A burial chamber is unearthed deep beneath London. A tyrant king, dead for a thousand years, prepares to rule again. Reformed pickpocket Eddie and his friends are more worried about the deadly Tick-Tock Killer who stalks his victims through London's foggy streets. But could the two be linked? The thrilling follow-up to The Parliament of Blood.

'My friends and I have braved the horrors of the Shadow Chamber - its secret traps and snares. We have crawled through sewers to escape an inhuman killer. We have fought creatures of animated clay and feared for our lives in the hidden cellarage of the Emperor's Theatre.

I have seen the poor souls whose brains have been replaced by mechanisms of clockwork. I have witnessed how they are entirely under the influence of an ancient curse. And now I have heard that the man I suspect to be our enemy is to perform his stage act at the Palace, by Royal Command.'

Would he dare? Can he be so bold? Is the next victim of this grisly process intended to be the Queen Empress herself?

'A spine-tingling read - I loved it.' - Julia Golding

Justin Richards has a wide range of books to his name, most importantly, the new Doctor Who. With these sort of credentials behind him, I had high expectations of this book.

While the novel had a good plot and elaborate mystery to base the story upon, it did lack the flair to maintain momentum throughout the entire novel. Justin had well developed characters and great dialogue to keep the characters interesting throughout the story, but it did falter a couple of times and break the sense of being in the book. That being said, it is still a good read and would be well received by the market it is aimed at.
Posted by Scott Wilson at 10:36 PM