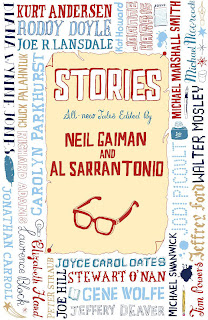 One hell of a huge book of great, exciting stories which will become a uniting force for readers of all forms of imaginative fiction.. Rather than being dictated by genre, for co-editors Gaiman and Sarrantonio there is only one true distinction in fiction: the one dividing realistic and imaginative fiction. STORIES is a collection of the very best original fiction from some of the most imaginative writers in the world, as well as a showcase for some of fiction's newer stars. .

It is always hard to give an overall review of an anthology, some of the stories are worth the cover price alone, and some of the stories are not ones that you would choose to include if you were the editor. The good thing about this anthology is it gives you an insight into the mind of Neil Gaiman; what he likes reading himself.
This anthology is a real mixed bag. I totally enjoyed many of the stories, but did find it hard to piece together the link between each story. I kind of like a theme to a collection of stories, ones that are all likeminded or similar. Just couldn’t work out why these ones were bunched together.

That being said, on the whole I found this volume to be very entertaining. Some of the stories found in these pages are ones that I will remember for some time. My favorite tales in this collection were the ones by Joe Hill, Michael Swanwick, Chuck Palaniuk, Lawrence Block and Kurt Anderson.
Posted by Scott Wilson at 2:37 AM