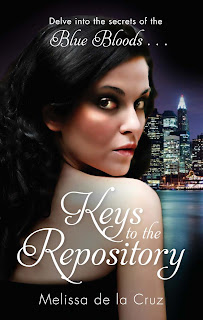 Lavish parties. Passionate meetings in the night. Bone-chilling murders. Exams. The day-to-day life of Schuyler Van Alen and her Blue Bloods friends (and enemies) is never boring. But there's oh-so-much more to know about the beautiful and powerful Blue Bloods. Below the streets of Manhattan, within the walls of the Repository, lies a wealth of revealing short stories, journal entries, and never-before-seen letters about the vampire elite dating back through time. Won't you come inside?

This book is for the diehard fans of the Blue Blood series mainly. It has summaries of each character’s life, in different formats and is a bit hard to follow if you don't know the stories already. It would serve as a good summary if you need to revisit the series before the next book comes out. If you are a follower of Melissa's series then you will most likely find this a nice little appetizer while waiting for the next book to come out. There are some questions raised that get you thinking about where the story is going to go shortly.

I liked the short stories, particularly the sneak peek for Wolf Fact and Dylan’s Story. I did enjoy the new chapters that Melissa provided that hadn't been included in previous books. In the sneak peek of Wolf Fact, Bliss is there. Something about what she said got me thinking that something will happen to her in Misguided Angel.
Posted by Scott Wilson at 3:46 AM