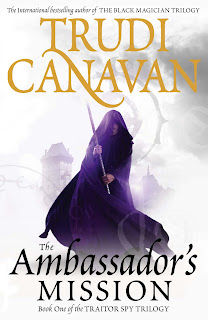 Scott Wilson recently caught up with local author Trudi Canavan to chat about her new book The Ambassador’s Mission, which was published by Orbit in May at $32.99, (author photo courtesy of Paul Ewins)

Scott: You have some pretty impressive credentials to your name, nominations for the Aurealis Award, Ditmar Award, wining the Aurealis Award in 1999 and having three books in the Australian top 10 SF bestseller lists. Can you tell us about these experiences and if the nominations still thrill you or is it just a routine now?

Trudi: The first award - the Aurealis Award for my first ever short story - completely floored me. Having it accepted for publication reassured me that I could actually write, but to win an award for it told me that people might actually like and enjoy what I write.

Being involved in the awards at the periphery (when I worked for Aurealis magazine) or knowing judges showed me that being shortlisted is the big achievement. Sometimes the winner is clear to the judges, but often the selection involves some compromise and negotiation. So I'm flattered whether my book wins or not.

The Ditmar I won was lovely in a whole other way, because that award is structured differently so it's like having friends pat you on the back. The Aurealis Award for The Magician's Apprentice was a huge surprise for me. I'd written it during a particularly difficult and depressing time, often struggling to write at all, so I had all these bad associations with it. I'd even considered changing my career to something other than writing. For that book to have won an award... it made the struggle worthwhile and convinced me it was worth pushing on. I'm glad I did, because I'm having so much fun writing the sequel to the Black Magician Trilogy. I've got my mojo back.

Having a book on a bestseller list is very different. Finding out how they work can have the opposite effect to finding out how awards work - you value them less except as selling tools. You hear that some bookshops chains make them up, to push the books they have plenty of. Or there are odd little variables that skew the statistics. I have also accepted that there'll always be a big release around the same time as mine that dominated the lists: first it was Lord of the Rings or Harry Potter and now it's Twilight.

Scott: Which of your characters was your favorite to write? The most challenging?

Trudi: I don't really have a favourite, though some were more fun to write than others. Emerahl in the Age of the Five trilogy was a really enjoyable character, and Stara was a nice surprise in The Magician's Apprentice. Currently I'm enjoying writing through Lorkin, the main protagonist in the Traitor Spy Trilogy, though the old favourites from the original series threaten to take over now and then.

Scott: What advice would you give young writers wanting to get their first novel published?

Trudi: Be humble, because you must be able to take on board feedback and work hard to make the book as good as possible. Be resilient, because you won't get anywhere if you can't bounce back from rejection. Be savvy, because knowing as much as you can about ALL aspects of the publishing industry (and not giving publishers bad reasons to remember you) will only increase your chances.

Scott: Tell us about your typical day of writing, for example, how many hours/pages/words would you write per day?

Trudi: I've found that I write best in the afternoon. So mornings are for input (research, Twitter, etc.) and afternoons are for output. I used to write an average of 5,000 words a day but that's shunk to about 2,000, but with a lot less rewriting later. This is actually better for my back - bad backs being a writerly occupational hazard.

Scott: You’ve written two trilogies now, what is it about your stories that they come in this format?

Trudi: I don't really aim to write trilogies, and I'm not sure why the story ideas end up suiting a division of three. The Black Magician Trilogy was supposed to be one book, but it got big. When I considered how to divide it up, there were two obvious minor resolutions then the big one. The Age of the Five favoured the same pattern. I deliberately set out to mimic the format of the Black Magician Trilogy for its sequel. Publishers like trilogies and series, and I only got away with having The Magician's Apprentice as a stand-alone because it links in with other trilogies.

The series I plan to write next is also a trilogy. But I have two ideas for stand-alone books as well. One is a young adult novel, and YA doesn't seem as resistant to stand-alone books. The other is a very new idea, so it may develop into a series with time.

Scott: Do you have any plans to write outside the realm of the fantasy genre?

Trudi: The young adult novel idea I've had waiting in the sidelines for years is a horror novel, and I have some short story ideas that sit in the horror or science fiction genres. But most of my ideas are fantasy.

Scott: What book/s are you currently reading?

Trudi: I always have a non-fiction and fiction book on the go. At the moment I'm reading Clean: A History of Hygiene and Purity. It's fascinating to learn how different people's attitudes and beliefs were in the past. I've just got to the part where the first self-help health books were produced. I know that, if ever I was to write a steampunk story, I'd definitely keep this book in mind.

For fiction, I'm making my way through Legends of Australian Fantasy between reading manuscripts for friends. I've made an attempt to read books by Aussie writers I haven't tried yet before Worldcon. But there's so much talent here, and so many new writers on the scene, I'm a slow reader, and I have a manuscript due by the con. I may have to settle on buying lots of books instead.
Posted by Scott Wilson at 1:51 AM