Dead In The Family 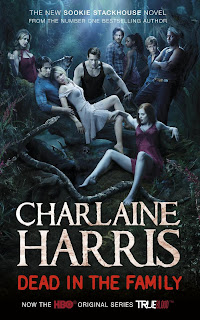 If you think your family relationships are complicated, think again: you haven't seen anything like the ones in Bon Temps, Louisiana. Sookie Stackhouse is dealing with a whole host of family problems, ranging from her own kin (a non-human fairy and a telepathic second cousin) demanding a place in her life, to her lover Eric's vampire sire, an ancient being who arrives with Eric's 'brother' in tow at a most inopportune moment. And Sookie's tracking down a distant relation of her ailing neighbour (and ex), Vampire Bill Compton. In addition to the multitude of family issues complicating her life, the werewolf pack of Shreveport has asked Sookie for a special favour and since Sookie is an obliging young woman, she agrees. But this favour for the wolves has dire results for Sookie, who is still recovering from the trauma of her abduction during the Fairy War.
Note: Prices subject to change.

I’ve been a big fan of both the series of novels and the tv series, at times, not knowing which one I preferred more. But then again, I read the first Sookie book well before the series was made, so some of the characters are not portrayed by the actor’s who I would have picked.

I’ve already read a few reviews that have said that this instalment of the Sookie series adds too many new sub-stories and minor plots that are left unresolved at the end. That may be, but you are left wanting more and this is not necessarily a bad thing for both the writer and reader. Who doesn’t want to read more about their favourite characters and less about those that aren’t their cup of tea. This book is much more in keeping with the earlier Sookie novels in tone.

Sookie gets her mojo back and Eric gets even more complex character development. We get to see the progression in Eric and Sookie's love for each other while Bill gets his own happy ending to tie up his storyline. We also see the return of some of the humor that endeared the early books to so many fans.

It is good to also see Jason maturing as a character and big brother for once and looking out for someone other than himself.

If you liked the earlier books, then you will enjoy this one.
Posted by Scott Wilson at 5:02 AM