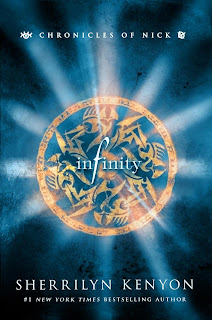 
With over 10 million copies of her books in print, Sherrilyn Kenyon is one of the most popular paranormal authors. Now she turns her hand to young adult fiction with the first in an exciting new series - a spin-off series of her bestselling Dark-Hunter series.

Teenager Nick Gautier thinks he knows everything. Streetwise, tough and savvy, his quick sarcasm is renowned. But his whole world is suddenly turned upside down on the night his best friends try to kill him.

Saved by a mysterious warrior, Nick is sucked into the realm of the Dark-Hunters - immortal vampire-slayers who risk everything to save humanity - and he quickly learns that the human world is only a veil for a much larger and more dangerous one that’s filled with all kinds of evil. However, before he can even learn the rules of this new world, his fellow students start turning into flesh-eating members of the undead.

Nick knows he’s in real danger and he soon has a lot more to deal with than starting high school: he’s under pressure to hide his new friends from his mother and his chainsaw from the principal while trying to impress the girl he has a crush on ? all without getting grounded, suspended...or killed.

INFINITY is the compelling, thrilling and unputdownable tale of one boy’s journey towards his ultimate destiny.

Sherrilyn Kenyon is the NEW YORK TIMES bestselling and award-winning author of several series: the Dark-Hunters; the Lords of Avalon; and the League. She lives with her husband and three sons in Nashville, Tennessee. Visit www.sherrilynkenyon.com

Well if you haven't heard of Sherrilyn Kenyon by now, you must be living under a rock. Her popular Dark Hunter series has been around since 2002, well before the popular fasination with lovely and conflicted vampires all teen girls seem to love these days.

This new series is aimed at a younger market, but still a great read for the older reader already familiar with the existing series.

The story flows along quite well and the pace is brisk. Definetly going to be a popular series for the YA market if the stories continue in line with this new storyline.
Posted by Scott Wilson at 3:33 AM