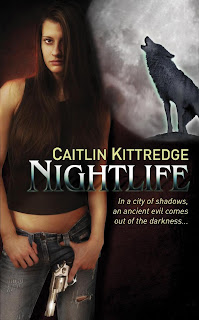 Nocturne City could be any big city in the US. Poor areas, rampant drugs and violent crime, witches, demons and were creatures. Homicide detective Luna Wilder is investigating the death of a drug addict and comes across a drug that is more a spell than a chemical. A drug that leads her to the centre of a vicious war being fought between witches, a war that threatens to unleash hell on Nocturne City. Backed by a gritty take on crime and a vivid look inside a police department leading a fight against crime out of our worst nightmares the nocturne city novels bring crime to Dark Fantasy

Caitlin Kittredge is the author of the Nocturne City series, about a werewolf detective. She collects vintage clothes and lives in Olympia, Washington with her two cats. Previous Books: Pure Blood (Bfmt Sep 10 9780575093737); Night Life (9780575093713)

With the glut of werewolf books on the market, Caitlin Kittredge manages to create a good, dark story that stands apart from the rest.

The main character in this novel, Luna, is well devloped and one tough cookie. Luna is a tough-as-nails cop, who's got a great mouth on her and a talent for landing herself in trouble. She does, however, know when she's gotten herself in a little too deep and isn't so headstrong she doesn't know when to call for help.

One of the areas that gets you thinking is the reference to "the Hex Wars", not enough in this book to let you know in detail what it's about, but does leave the possibility of a spin off novel later on. It is a well-crafted world that is rich with history and there's no point in bogging down the fantastic action with a whole lot of backstory when it's not needed.

My teenage daughter reaaly enjoyed this first installation in a new series and devoured it in one night. Now she's hanging out for the next one.
Posted by Scott Wilson at 3:58 AM