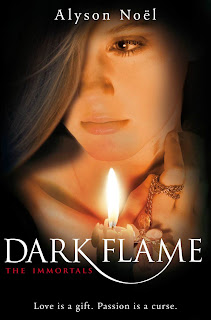 At the start of this mesmerizing new installment of the Immortals series, Ever is helping her friend Haven transition into life as an immortal. But with Haven drunk on her new powers and carelessly putting them all at risk, their friendship becomes more and more strained.

At the same time, Ever delves deeper into magick in order to get control over her enemy Roman and free Damen from his power. But when the spell she casts on Roman backfires, she's bound to her deadliest enemy. Frantic to reverse the spell the moment the moon enters a new phase, she finds her efforts are fruitless – there's a strange, foreign pulse coursing through her, one that propels her toward Roman.
Desperate to break free of this terrible curse before Damen or the twins can discover what she's done, she turns to Jude and delves deeper and deeper into dark magick, ultimately risking everything she knows and loves – including Damen.

Alyson Noel lives in Orange County, California, which forms the backdrop to her incredible new series The Immortals. She is a #1 New York Times bestselling author with Evermore, the first book in the Immortals series, and in addition to its sequels Blue Moon and Shadowland, she has written numerous teen novels – Faking 19, Art Geeks and Prom Queens, Laguna Cove, Kiss & Blog, Saving Zoe and Cruel Summer.

Dark Flame is the fourth in The Immortals series and has been eagerly awaited by many, including my daughter. Having read the first three in the series recently in anticipation for the reviewers copy of Dark Flame to arrive, I had to struggle with her to be able to read it myself.

Yes, it is another vampire novel. But the main character, Evermore is a real likeable character. Her character is well developed and easy to feel for after seeing her grow over the last three novels. Dark Flame is a story of love and sacrifice, told through a well-developed plot and exhilarating characters.

If you haven't read the first three, I'd recommend that you do so before picking up this one. On the other hand, if you've been eagerly awaiting the next instalment, then this book won't disappoint you.
Posted by Scott Wilson at 10:48 PM