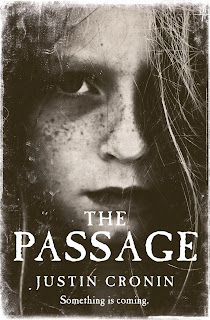 Amy Harper Bellafonte is six years old and her mother thinks she's the most important person in the whole world. She is. Anthony Carter doesn't think he could ever be in a worse place than Death Row. He's wrong. FBI agent Brad Wolgast thinks something beyond imagination is coming. It is. THE PASSAGE.

Another vampire novel I hear many of you say. Yes, but this one’s not about a conflicted relationship between the new girl at school and the local vamp, who just happens to be a caring and loving heartthrob. No, this epic adventure seems poised to announce itself as the latest true "horror epic." A rival to Stephen King’s masterpiece “The Stand”.

This epic begins in the near future with a blend of vampiric lore and those damned mad scientists who are always hell bent of seeing Armageddon take place. It’s not an extended version of I Am Legend, if that’s what you might think from the back cover either. There are much more complex character structures and sub plots driving this story along.

There are some similarities between “The Stand" and The Passage, in the reoccurring theme of the ordinary survivor rising up to greatness in the fight of good against evil. Here Cronin sets the apocolyptic destruction of the world as we know it, similar to the stand, as is the ultimate confrontation between good and evil with the requisite supernatural elements, but they are miles apart in the style of writing and flow of the story.

The Passage is a great stand alone epic and should be judged on it’s merits, rather than on the similarities to Stephen King’s “The Stand”.
Posted by Scott Wilson at 5:20 AM