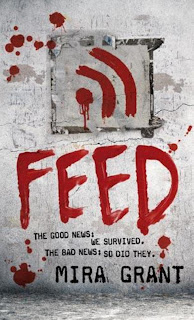 Mira Grant
Mira Grant is the open pseudonym of Seanan McGuire, a successful fantasy writer. She can be found online at www.seananmcguire.com

The year was 2014. We had cured cancer. We had beaten the common cold. But in doing so we created something new, something terrible that no one could stop. The infection spread, virus blocks taking over bodies and minds with one, unstoppable command: FEED. Now, twenty years after the Rising, bloggers Georgia and Sean Mason are on the trail of the biggest story of their lives - the dark conspiracy behind the infected. The truth will get out, even if it kills them

If you’ve never been interested in zombies before, then this one will convert you. Feed is Seanan McGuire's first novel to be published in the Newsflesh trilogy, written under the pen name, Mira Grant. Grant's writing is well thought out and thoroughly researched providing for a very convincing post-apocalyptic future.
The story is set in the year 2014, and though a clichéd plot of the scientific experiments to cure cancer and the common cold resulted in two viral strains that when mixed together, create a deadly zombie causing infection; it is new and original as there is no use of gore. It is also original as the virus turns both humans and large animals into Zombies.

Grant's world building efforts transport us to a very frightening and believable version of the future. The plot is set in the year 2039 and sensationalistic news reporting is a thing of the past. Blogging has replaced broadcast and print media-- bloggers of the future are considered the only reliable source where viewers and readers can get up-to-date news. Grant takes the blogging world that we know and elevates it to a very plausible future. Grant also breaks the tension and makes the characters believable by giving them a sense of humor.

Once again, I can’t wait for the next book in the series to come out. Why won’t they stop writing trilogies. Oh, the humanity of it all.
Posted by Scott Wilson at 2:08 AM