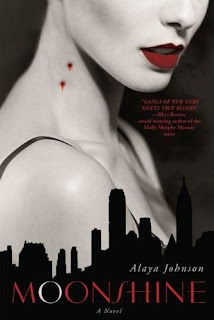 Imagining vampires at the heart of the social struggles of 1920s, Moonshine blends a tempestuous romance with dramatic historical fiction, populated by a lively mythology inhabiting the gritty New York City streets.

Zephyr Hollis is an underfed, overzealous social activist who teaches night school to the underprivileged of the Lower East Side. Strapped for cash, Zephyr agrees to help a student, the mysterious Amir, who proposes she use her charity worker cover to bring down a notorious vampire mob boss. What he doesn't tell her is why. Soon enough she's tutoring a child criminal with an angelic voice, dodging vampires high on a new blood-based street drug, and trying to determine the real reason behind Amir's request – not to mention attempting to resist (often unsuccessfully) his dark, inhuman charm.

Alaya Johnson is a recent Columbia graduate, and denizen of New York City.

I enjoyed this book. Set in the 1920’s where social problems are more common than depicted in Hollywood movies; it is a refreshing scene for a vampire novel.
If it isn’t tough enough being from a poor family back in the 20’s then try being from the socially outcast group known as “The Others”. Others are a group of non-humans, who are like humans in the sense that they are individuals who can be either good or bad. But like other xenophobia’s, others are all deemed to be evil by those who don’t understand them.

The main character, Zephyr, is a skilled hunter who also happens to be immune to the venom of a vampire’s bite. Her character is interesting and believable, so it was quite easy to fall into this novel and become part of Zephyr’s world. The book is set in a world of layers where black and white are very rarely the norm. In fact this sense of gray is even further used in the description of the backdrop of New York, scenes are set in the snowy white winter streets, shady alleyways or the dark tunnels beneath the city.

While the story is tied up neatly in the end, there is the possibility of it continuing in another novel. Not a bad read and worth taking a look at.
Posted by Scott Wilson at 9:17 PM