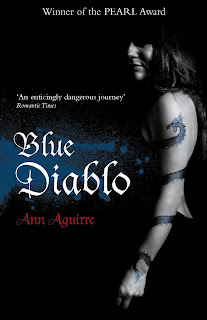 Right now, I'm a redhead. I've been blonde and brunette as the situation requires, though an unscheduled colour change usually means relocating in the middle of the night. So far, I'm doing well here. Nobody knows what I'm running from.

Eighteen months ago, Corine Solomon crossed the border to Mexico City, fleeing her past, her lover and her 'gift' – for Corine is a handler: she can touch something and know its history and sometimes, its future. Using her ability, she can find the missing – and that's why people never stop trying to find her. People like her ex, Chance.

Chance's uncanny luck has led him to her doorstep. He needs her help. Someone dear to them both has gone missing in Laredo, Texas and the only hope of finding her is through Corine's gift. But their search is going to get dangerous as the trail leads them into a strange dark world of demons and sorcerers, ghosts and witchcraft, zombies – and the blackest of black magic.

Blue Diablo is the first in a new series. Devilishly fast-moving, sexy as hell, and with a darkly gripping story: this is paranormal fantasy at its best.

Ann Aguirre is a rising star in the paranormal and urban fantasy field. Ann was the winner of the 2008 Pearl Award (Paranormal Excellence Award in Romantic Literature) for Best Newcomer. She has been a clown, a clerk, a voice actress and a saviour of stray kittens, not necessarily in that order. She grew up in America, but now she lives in sunny Mexico with her family. As well as her bestselling paranormal fantasy and science fiction, she also writes high-octane romances under the pseudonym of Ava Gray.

I liked the novel for what it was, a short urban fantasy in a new series. I think I would have liked this book more if it was stand alone, the new trend is for series of urban fantasy novels, leaving many issues unresolved.

This series centers around Corine Solomon, who is a Handler - someone who can touch an object and recall its past. This means she's really sought after for her skills, but they have a high price for Corine, physically and in other ways. At the start of Blue Diablo Corine is in Mexico, living as an expatriate and not using her special handler talent. The setting for this novel makes it more original than some of the others in the genre at the moment, so that was a big plus and refreshing for me.

I'm hoping that the next in the series will see a more complete story and not a bridge to the next book.
Posted by Scott Wilson at 4:08 AM