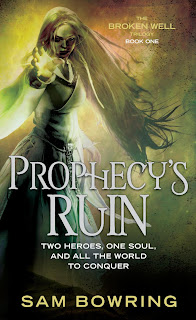 Sam Bowring
Sam Bowring lives in Sydney and is a comedian and writer. As well as creating his own stand-up routines, he has written for Rove Live (Network Ten), The Mansion (thecomedychannel), The Big Bite (Channel 7) and The Ronnie Johns Half Hour (Network Ten). He lives in Sydney, Australia.

For a millennium the lands of Kainordas and Fenvarrow have been at war, ever since the gods of shadow and light broke the Great Well of Souls. In the absence of victory, they have settled into an uneasy stalemate - until a prophecy foretells of a child of power who will finally break the balance. Each side races to find the child, and when they do, a battle ensues with unexpected consequences - in a terrible accident, the child's very soul is ripped in two. Each side retreats with their own part of the child, uncertain as to whether they now possess the one capable of finally ending their age-old battle. PROPHECY'S RUIN tells the story of the two boys as they grow to be men. Bel becomes a charismatic though troubled warrior, Losara an enigmatic and thoughtful mage. Both are powerful young men, yet incomplete. As they struggle to discover their place in the world and the shape of their destinies, inevitably each has to ask the ultimate question: will he, one day, have to face himself?

For the breakthrough fantasy novel of an Aussie writer, you couldn’t ask for more. There are too few Australian writers of Fantasy published, especially ones that are this good. I loved the world building that happened in the start of the story. The book is thankfully broken into smaller pieces; the birth, the initial raising, the boy/man at his coming of age. The gaps in between are filled in with memories as the current plot arc continues. The world building is necessary although at times the difference between shadowdreams and reality can be confusing.
I enjoyed the development of the two main characters as they matured and became increasingly interesting as the novel drew me in. Can’t wait to see how their story continues through the next two books.

Sam’s characters are well built and the choice between Bel the Light Warrior and Losara the Shadow Mage to be difficult, each has elements that make the reader want to cheer for them. I want to see them each succeed and I want to see their halves united. The only bad part of this novel was the fact you have to buy the next two as they are addictive. Let’s hope that Sam doesn’t make his series into twelve book epic like David Eddings, (it cost me a fortune to feed that addiction).
Posted by Scott Wilson at 1:40 AM