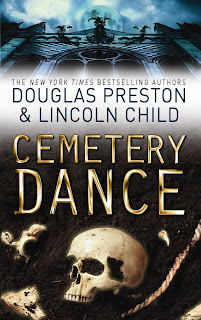 Cemetery Dance
Preston; Child
ISBN 0752884182(978-075-288418-9)
RRP $22.99 July 2010
Orion Fiction Paperback (198 x 129)
FBI Special Agent Aloysius Pendergast - recently returned to New York - and Lieutenant Vincent D'Agosta find themselves investigating the murder of a friend when reporter William Smithback and his wife Nora are brutally attacked in their apartment. The assailant is identified by eyewitnesses as their strange, sinister neighbour - a man who, by all accounts, died ten days earlier. Shunning the official inquiry, Pendergast and D'Agosta undertake their own private - and unorthodox - quest for the truth. Their journey takes them deep into the dark and mysterious underbelly of Manhattan, to a secretive, reclusive cult of Obeah and voodoo which no outsiders have ever survived...
Note: Prices subject to change.

I just finished this book and it brought back the feeling I had when I first read Relic and met Agent Pendergast. “Cemetery Dance” is the latest book in a series that started with Relic. This novel is set in New York with the story revolving around the themes of Voudou, zombiis, animal rights, greed, as well as the dance that is always played between people in relationships. The relationship between the main characters, which the authors Douglas Preston and Lincoln Child have developed, is believable and entertaining.

This is one of those books where you just have to say to yourself, okay, this is totally escape reading and it's so far-fetched that it can't possibly ever be true. Once you get past that hurdle, you can sit back, relax, and enjoy the ride.

Preston and Child are intellectual without being stifling and they scare the hell out of you with subtlety and without resorting to the cheap or lurid.
Posted by Scott Wilson at 5:32 AM