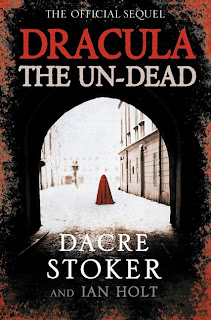 Dracula: The Un-Dead
By Dacre and Holt, Ian Stoker

The story begins in 1912, twenty-five years after the events described in the original novel. Dr. Jack Seward, now a disgraced morphine addict, hunts vampires across Europe with the help of a mysterious benefactor. Meanwhile, Quincey Harker, the grown son of Jonathan and Mina, leaves law school to pursue a career in stage at London′s famous Lyceum Theatre.

The production of Dracula at the Lyceum, directed and produced by Bram Stoker, has recently lost its star. Luckily, Quincey knows how to contact the famed Hungarian actor Basarab, who agrees to take the lead role.

Quincey soon discovers that the play features his parents and their former friends as characters, and seems to reveal much about the terrible secrets he′s always suspected them of harbouring. But, before he can confront them, Jonathan Harker is found murdered.

The writers were able to access Bram Stoker′s hand-written notes and have included in their story characters and plot threads that had been excised by the publisher from the original printing over a century ago.

Dracula is one of the most recognized fictional characters in the world, having spawned dozens of multi-media spin-offs. The Un-Dead is the first Dracula story to enjoy the full support of the Stoker estate since the original 1931 movie starring Bela Lugosi.

The big drawcard for this novel for many will be the name, and rightly so. The legacy lives on, in more ways than one.

Many people have played with the vampire milieu over the decades with varying degrees of success—giving their own parameters to the vampire worlds they create. I consider Bram Stoker a master of horror and fantasy, and appreciate the rules he set for his vampires. Many of these rule have survived to today's vampire tales, and when they are broken, people tend to get a bit upset. If someone wants to make changes to B. Stoker’s world and rules, it sure better be someone in the Stoker family who has what I consider the right to mess with his or her patriarch’s ideas.

Dacre Stoker, the great-grandnephew of B. Stoker teamed up with a screenwriter, Ian Holt (more on Holt’s probable literary influence in a moment. When the band of heroes that included Mina and Jonathan Harker, Jack Seward, Arthur Holmwood, and Professor Van Helsing, battled the original Count Dracula 25 years before this novel’s opening, they became tainted in ways easy enough for a reader to accept. Jonathan became a raging alcoholic philanderer through his disappointment in Mina’s betrayal. Their marriage is a lifeless mockery of the institution, etc. Now we see what became of the survivors, be it through a decendant of the original author.

If you’re looking for a good vampire story, you can’t beat the original B. Stoker’s Dracula. This D. Stoker sequel is a decent book on its own merits, but the poor author won’t get the benefit of the doubt because he’s got “that name.” When your great-granduncle has a horror award named after him, you have a lot to live up to when you start rewriting pieces of the horror novel that propelled him to fame. From scattered, random gems of excellent writing to a fast-paced second half, D. Stoker has provided an entertaining story that has its moments of frustration and poor proofreading, and its moments of mystery and motion.
Posted by Scott Wilson at 4:22 AM