Book Review: THE UNIVERSE PARALLEL Triad of Being Book Two by TRACI HARDING 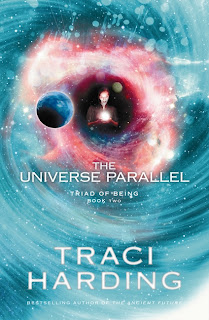 THE UNIVERSE PARALLEL Triad of Being Book Two by TRACI HARDING

Over a successful fourteen year career, Traci Harding has emerged as a leading force in the world of speculative fiction and has built a strong following of legions of fans. Without formal writing training, she has emerged as a natural storyteller, and believes that persistence and an overactive imagination are what helped her rise to the top of the genre.

Traci Harding said: “I never did any courses to learn about writing. I merely pursued my interest in unexplained phenomenon, history, ancient mythology and time and space, and combined this with my imagination to carve a writing career. To all those writers who feel they may not have what it takes, I say write because you love it, because if a dyslexic, who never did well in English can become a published author, anything is possible.”

About The Universe Parallel: Triad of Being Book Two:

Amidst a raging space-quake and shrouded by celestial mist, the lost world of Maladaan appears in the Esh-mah star system hurtling towards the sun. Taren Lenox and Lucian Gervaise, floating adrift through space, are rescued by the immortal psychics of a utopian planet. But their saviours believe Taren and Lucian to be incarnations of their great ancestors, come to help them remove the alien planet from their star system. Aided by her new allies, Taren moves to retrieve her lost memories from the Maladaan Secret Service’s memory bank in Esponisa. She discovers that the way to return Maladaan to its rightful universe and future, lies ten years in her past.

I’m quite ashamed to say that I have never heard of Traci Harding or read any of her novels prior to this second one in her latest trilogy. I usually go out of my way to look for local Australian authors and support them as much as I can, so I’m not sure how this Aussie author’s slipped through the cracks in my library of sci-fi.

This book begins with the main character, Avery, Lord of the Otherworld meeting with his mother whom warns of a cosmological event that will take place and put Kila & Maladaan in grave danger. The format of this book is interesting with its various incarnates of past and present characters emerging and Taren, an manifestation of Tori Alexander must retrieve her stolen memories from as association known as the Secret Service Memory Bank on Maladaan in order to figure a way to prevent the cosmological event from ever occurring.

I’m not sure what happened in the first instalment of this novel, but now that I’ve had a taste of Harding’s work, I’m hooked and will be picking up the first in this series as soon as I can afford it.
Posted by Scott Wilson at 3:21 AM