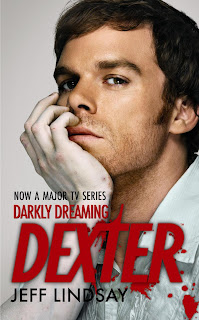 At heart, Dexter is the perfect gentlemen: he has a shy girlfriend and seems to lead a quiet, normal life bordering on the mundane. Despite the fact that he can't stand the sight of blood, he works as a blood-spatter analyst for the Miami police.
But Dexter also has a secret hobby: he is an accomplished serial killer. So far, he's killed 36 people and has never been caught because he knows exactly how to hide the evidence. And whilst that may lead some people to assume he's not such a nice guy, he tempers his insatiable hunger for brutality by only killing the bad guys.
However, Dexter's well-organised life is suddenly disrupted when a second, much more visible serial killer appears in Miami. Intrigued that the other killer favours a style similar to his own, Dexter soon realises that the mysterious new arrival is not simply invading his turf but offering him a direct invitation to 'come out and play'...

Darkly Dreaming Dexter is the first book in the fantastic series by Jeff Lindsay about a serial killer with a code of ethics. Dexter is a blood spatter analyst with the Miami PD during the day and a cold blooded killer during the evening. As an orphan, Dexter was raised by police officer, Harry, who saw what Dexter calls “The Dark Passenger”, growing in him as a child. Harry raises Dexter as his own son, showing him the skills he needs to live a double life as a law abiding and respectable citizen, while releasing the uncontrollable urge to kill after carefully selecting a “deserving” victim.

Lindsay creates an extremely complex character in Dexter, with constant inner dialogue between Dexter, The Dark Passenger and Harry.

Complicating Dexter’s life even more is the close relationship he has with his step-sister Deb, who is also a police officer with the Miami PD.

Darkly Dreaming Dexter is a very well written novel with many layers and sub-plots to keep the reader interested and on the edge of their seat.

Followers of the TV series will notice the artistic license that the series takes over the true character traits in Lindsay’s books. I find the books more interesting and suspenseful than the TV series, where drastic changes are made to the story line.

If you love the show, read the books.
Posted by Scott Wilson at 1:34 AM