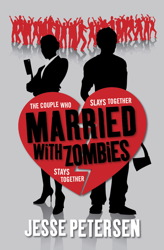 Meet Sarah and David. Sarah and David are like any other couple. They met, they fell in love, but now they're on the verge of divorce. On a routine trip to the marriage counsellor, they notice a few odd things -- the lack of cars on the road, the missing security guard, and the fact that their counsellor, Dr Kelly, is ripping out her previous client's throat.

Meet the zombies. Now, Sarah and David are fighting for survival in the middle of the zombie apocalypse. But just because there are zombies, it doesn't mean you’re other problems go away. And if the zombies don't eat their brains, they might just kill each other

This isn’t your typical zombie apocalypse novel. This is a pretty light hearted story with a sense of humour, in other words it would be a zomcom if it were a movie. Married with Zombies is about an unhappily married couple, David and Sarah, who are on the verge of a divorce until something bigger interrupts; the global outbreak of zombie mayhem. I can see this novel being made into a movie with Ashton Kutcher as the David.

There were just so many things about this movie that would make it a great movie, such as the classic zombie kills. Move over Woody Harelson in Zombieland, in Married With Zombies we see David and Sarah dispatch zombies with a Dr Phil self-help book, letter opener and high-heel shoe.

By the end of the book the unhappy couple have worked out some of the issues that caused their near divorce and decide to stick it out. At least until the zombie apocalypse is over.
Posted by Scott Wilson at 8:47 PM