BOOK REVIEW: Tomorrow When The War Began 3: The Third Day, The Frost 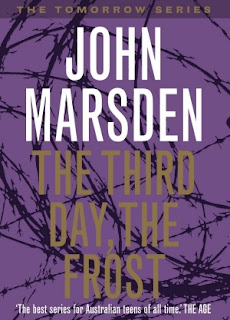 Title: The Third Day, The Frost

Live what you believe in... die fighting for it.

The third day comes a frost... a killing frost.

The enemy spreads across the land, cold and relentless. They invade. They destroy. They kill.

Only the heroism of Ellie and her friends can stop them.

When hot courage meets icy death, who will win through?

The Third Day, The Frost is the third volume in the award-winning Tomorrow series.

The Third Day, The Frost, is the third book in the Tomorrow Series by John Marsden. With this third book we see a formula developing for the plot; the group’s morale is at an all time low after a bittersweet success at the end of the previous book. As Marsden is a school teacher, he probably knows the psyche of a group of teens better than most, so perhaps he has an insight into how this group of survivors would act and react.

The group rescue one of its own and learn of the enemies plans, which they manage to disrupt again, this time by sinking one of their ships. We also see the group finding a radio strong enough to contact the New Zealand Army and send for help.

At the end of this book it looks as though the story might finish, but that is due to the series originally only being a trilogy that grew like the Hitchhiker’s Guide series to be an eight part trilogy. There were some pretty grim looking scenes in this book, with more than one occasion where you thought the heroes might finally run out of luck.

A great read that will keep the reader on the edge of their seat.
Posted by Scott Wilson at 2:59 AM