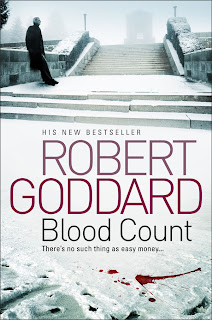 There’s no such thing as easy money. As surgeon Edward Hammond is about to find out. Thirteen years ago he performed a life saving operation on a Serbian gangster, Dragan Gazi. Gazi is now standing trial for war crimes in the international court in The Hague. After his life was saved, his men went on to slaughter thousands in the Balkan civil wars.

Now Gazi’s family want more from him: in exchange for keeping Hammond’s dirty little secret, they want him to find for them the man who holds the key to all the money Gazi squirreled away before he was locked up. But Italian financier, Marco Piravani, doesn’t want to be found, not by Hammond, not by anyone. No sooner has Hammond tracked him down, than Piravani has disappeared again.

His pursuit will take him first to the Hague, and then to Milan to find the Italian, and then finally back to the scene of his crime, Belgrade, where he must confront the decisions he once so easily took. Only then will he be able to lay the past to rest...

I had never heard of Robert Goddard before I read this book and was not sure what to expect. The blurb about the book sounded like the plot would be very thought provoking and interesting, which it was.

The plot is about a Serbian criminal, Dragan Gazi, who’s life is saved by a doctor. While this may sound normal, Gazi went on to organise the killing of thousands of civilians in the Balkan wars in the decade after his life was saved. With the guilt of saving this cold blooded killer, surgeon Edward Hammond is blackmailed into helping Gazi.

I found the characters to be well crafted and easy to feel a strong hatred to the gangster Gazi. It was difficult to feel any sort of sympathy for Hammond even though he was only doing his duty as a medical officer by saving Gazi’s life. Hard to think what you would do in the same situation, especially if you didn’t know who the patient was. But then to help the criminal later, that is the real question of character.

This book was very thought provoking and well paced.
Posted by Scott Wilson at 3:57 PM