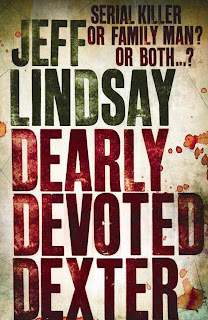 Miami's best-dressed serial killer is back and on the prowl - as least he would be if he could shake his permanent shadow. Ever since their paths first crossed, Sergeant Doakes hasn't let Dexter Morgan out of his sight. Dexter may well be the Miami PD's blood-spatter analyst, but Sgt. Doakes has a pretty good idea of how Dexter likes to spend his free time and he's determined to catch him in the act.

Dexter hasn't killed in months and is getting twitchy. To throw Doakes off his scent, he's spending more time with Rita, his girlfriend. But no matter how many cosy nights they spend in front of the TV, Doakes is still watching.

Then a body turns up and Doakes and Dexter will have to work together...if they can trust each other. It's a devil's pact and one of them will have to be the bait...

Dearly Devoted Dexter is the second book in the popular Dexter series by author Jeff Lindsay. If you’ve been following the series on TV based on these books then you’ll notice some significant variances in the story line and actions of the characters.

After the events of the first book, one of Dexter’s co-workers, Sg Doakes, is suspicious of Dexter and his evening activities. While this is not a surprise as how could so many detectives not notice the strange behaviour of Dexter and not suspect him of being guilty of something. With Doakes hot on Dexter’s tail, Dexter begins spending more time with his girlfriend, Rita, in the hope of throwing his suspicious colleague off the trail. The inner conflict that this causes Dexter as he can’t go out and kill like he likes to. To make things worse, Dexter has to help his sister solve the latest case so that she can get promoted. There’s nothing Dexter would rather than keep the criminal safe from Deb so he could take care of him in his own special way.

Another great book in Lindsay’s series and better than the show, (although I still enjoy it for what it is).
Posted by Scott Wilson at 1:53 AM