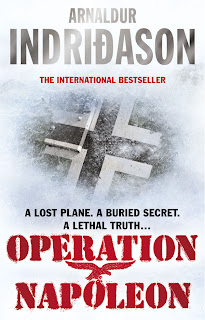 From the CWA Gold Dagger-winning author of the Reykjavík Murder Mystery series comes an international thriller sweeping from modern Iceland to America and Nazi Germany at the end of World War II.

1945: a German bomber flies over Iceland in a blizzard; the crew have lost their way and eventually crash on the Vatnajökull glacier, the largest in Europe. Puzzlingly, there are both German and American officers on board. One of the senior German officers claims that their best chance of survival is to try to walk to the nearest farm and sets off, a briefcase handcuffed to his wrist. He soon disappears into the white vastness.

1999, mid-winter, and the US Army is secretively trying to remove an aeroplane from the Vatnajökull glacier. By coincidence two young Icelanders become involved – but will pay with their lives. Before they are captured, one of the two contacts his sister, Kristin, who will not rest until she discovers the truth of her brother’s fate. Her pursuit puts her in great danger, leading her on a long and hazardous journey in search of the key to the riddle about Operation Napoleon.

Operation Napoleon was first published in Iceland in 1999 and only just been published in English in 2010. The book is set in the time of World War 2 in Iceland, based on a Vatnajokull glacier where a plane has crashed. After a fruitless search by the US Army who were based in Iceland at the time, the story skips forward 50 years when a satellite image shows up the exact location of the mystery plane.

The search begins again with both the US Army and locals in a race to track down the plane of unknown origins. Conflict and resistance between the local government and US begins leading to an interesting read and suspenseful plot.

If you enjoy a good thriller in the vein of Tom Clancy then this book will be one for you.
Posted by Scott Wilson at 2:24 PM