BOOK REVIEW: Tomorrow When The War Began 4: Darkness, Be My Friend 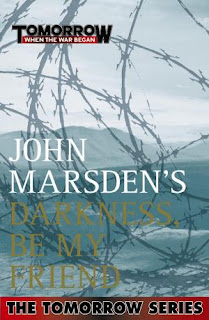 Title: Darkness, Be My Friend

Nowhere to run; one place left to hide. You're running from bullets through the streets of your own town. Your life's on the line and no-one's there to help.

When did safety turn to fear, peace turn to war, happiness turn to panic? When did your normal day become a nightmare?

Ellie and her friends struggle with the biggest questions life can offer in Darkness, Be My Friend, the fourth book in the award-winning Tomorrow series.

Darkness, Be My Friend is the forth book in the series of Tomorrow When The War Began. It has the tough task of picking up where the previous book left off, especially given that the series was wound up with it originally only being a trilogy. The start of Darkness, sees the group trying to live a life as refugees in New Zealand, where they were taken after being rescued at the end of book three.

Out of all of the books in this series, this one would be the weakest, with the plot of the New Zealand Army recruiting the group as a crack team of troops to go back to Australia to fight the invaders. The story is a bit hard to swallow until the reader gets past this stumbling block and the teens are back in the familiar element of the Australian Outback and fighting not only the enemy but also for survival.

After failed sabotage attempts, the group are left stranded and abandoned by the New Zealand Army, back to where they started in book one, but with less members and less friends and family alive in the concentration camps.
Posted by Scott Wilson at 3:12 AM