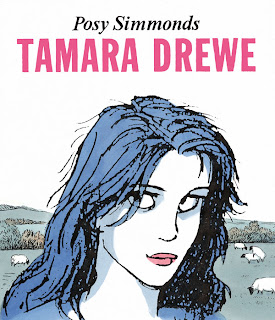 Tamara Drewe has transformed herself. Plastic surgery, a different wardrobe, a smouldering look, have given her confidence and a new and thrilling power to attract, which she uses recklessly. Often just for the fun of it.

People are drawn to Tamara Drewe, male and female. In the remote village where her late mother lived Tamara arrives to clear up the house. Here she becomes an object of lust, of envy, the focus of unrequited love, a seductress. To the village teenagers she is ‘plastic-fantastic’, a role model. Ultimately, when her hot and indiscriminate glances lead to tragedy, she is seen as a man-eater and a heartless marriage wrecker.

First appearing as a serial in the Guardian, in book form Tamara Drewe has been enlarged, embellished and lovingly improved by the author.

Tamara Drewe is not a graphic novel for the kids, with its adult themes and pictures. The story is centered around Stonefield, an English country manor where people can drive into London for the day, but sometimes depending on the traffic they might have to stay overnight, or at least it’s a good excuse. The manor is used as a retreat for writers and run by husband and wife Nick and Beth. Nick is also a best-selling author of crime fiction. Beth is kept busy running the retreat, but Nick is busy doing a lot of other things besides writing his books.

A young woman named Tamara Drewe has moved back to her family estate. She recently had a nose job, likes to wear short shorts, and drives most of the men crazy. Sound like a mixture for trouble and adult entertainment.

Tamara Drewe was made into a movie in 2010 Starring Gemma Arterton, Roger Allem, Bill Camp, Dominic Cooper, Luke Evans, Tamsin Greig and directed by Stephen Frears.
Posted by Scott Wilson at 4:20 AM