Book Review: The Fallen 1 The Fallen and Leviathan By Thomas E. Sniegoski

The Fallen 1 The Fallen and Leviathan By Thomas E. Sniegoski 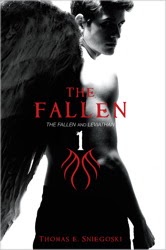 THE ULTIMATE QUEST FOR REDEMPTION

On his eighteenth birthday, Aaron begins to hear strange voices and is convinced he is going insane. But having moved from foster home to foster home, Aaron doesn't know whom he can trust. He wants to confide in the cute girl from class, but fears she'll confirm he's crazy.

Then a mysterious man begins following Aaron. He knows about Aaron's troubled past and his new powers. And he has a message for Aaron: As the son of a mortal and an angel, Aaron has been chosen to redeem the Fallen.

Aaron tries to dismiss the news and resists his supernatural abilities. But he must accept his newfound heritage -- and quickly. For the dark powers are gaining strength, and are hell-bent on destroying him....

Angels are the new vampires, or so it seems. There are a few novels for the YA market around at the moment that are based on these celestial beings.

Fallen is about a senior high school student, Aaron Corbet, who starts to hear voices and have a repetitive dream every night. It’s not long into the novel before the MC is visited by an angel and told that he is not just your typical teen. Corbet is actual the offspring of a fallen angel and mortal, commonly known as a Nephilim. To make things even worse, he isn’t just any old Nephilim, but the chose one that would reunite all of the fallen angels with God.

With the stage set, the book kicks off with an all out war between two factions of angels. While this is not a unique theme, it is well written for the YA market, making it a good book for making into a movie. I finished this first novel and will be picking up a copy of part two to see what happens next.
Posted by Scott Wilson at 2:45 AM