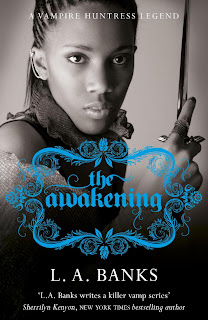 A battle is brewing in the Underworld and at the centre of it all is Damali Richards. Damali is a vampire huntress, but not just any huntress - she is the Millenium: a vampire huntress so powerful the vampire world is prepared to go to war over who should possess her.

Fallon Nuit, a rogue vampire, in league with demons, is determined to claim her but then an ex-lover turned vampire enters the fray. But Damali is not about to let anyone, or anything, fight over her without having her own say.

The Awakening is the second book in the Vampire Huntress Series of book by author LA Banks. The story in The Awakening continues on seamlessly from the first one, Minion, and could almost be added to the first novel to make a large novel.

The main character, Damali, takes a bit more of a step back in this book with the focus revolving around Carlos, who is developed quite well as a supporting character.

The novel revolves around the story of the a being known as a Neteru, a divinely created female vampire slayer who has the ability to carry a vampire baby that will be born with the ability to walk in the daylight and transform other vampires into day walkers as well.

Damali Richards is the huntress mentioned above, and Carlos Rivera is an older vampire summoned by the Vampire Council to capture Damali for the Councils sinister purposes. There are also many other supernatural beings such as half demons, half vampires and half humans, with guardian angels.

Originally published in 2004, this book has been rereleased to fill the needs of the crazed paranormal romance fans. Not a bad read.
Posted by Scott Wilson at 3:25 AM