BOOK REVIEW: Tomorrow When The War Began 5: Burning For Revenge 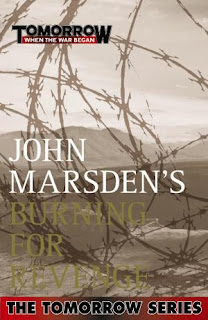 The world is in flames...

You look behind – there's nothing but smoke. Ahead of you the future has just burst into flames.

Your life is on fire. The world's an inferno.

You're burning... with passion and fear, with love and rage.

You're burning for revenge.

Burning For Revenge is the fifth volume in the award-winning Tomorrow series.

Book five in the Tomorrow When The War Began series goes back to the tried and tested formula Marsden found success with in the first three book in the series. With the group now back in Australia and fighting the enemy and also for survival, friction and low morale hits the group again. While Ellie remains the strong heroine of the group, we see others take on slightly different roles and personalities. Kevin breaks down, Lee betrays Ellie and more survivors are found.

The group finally manages to destroy the airfield that eluded them in the previous book, but at a cost again. This book returns to fine form and is full of suspense and action like the first three.
Posted by Scott Wilson at 3:23 AM