BOOK REVIEW: Tomorrow When The War Began 6: The Night Is For Hunting

Title: Night Is For Hunting 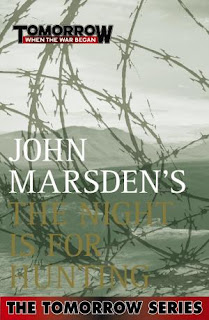 Hunting and being hunted.

Sometimes life seems to offer nothing more than a chase to the death. The fight to survive has never been fiercer.

But as they wage war, Ellie and her friends still find time for other things: friendship... loyalty... even Christmas.

If only they can withstand another night.

The Night is for Hunting is the sixth volume in the award-winning Tomorrow series.

Book six in the Tomorrow When The War Began series sees the group grow with the five new children rescued from the encounter at the end of the previous book. This union is short lived before the new group of kids runs off, only to be tracked down by Ellie and her group and brought back to the safety of Hell.

Having the younger members of the group proves to be a blessing and a curse, with the group enjoying the innocence of the children and their actions, but also leads to another unnecessary encounter and capture by the invaders.

After six books in the safe haven of Hell, the invaders finally locate them and now the group have to find a new sanctuary.

Another well written and fast paced book by Marsden.
Posted by Scott Wilson at 3:33 AM