BOOK REVIEW: Tomorrow When The War Began 2: The Dead Of The Night 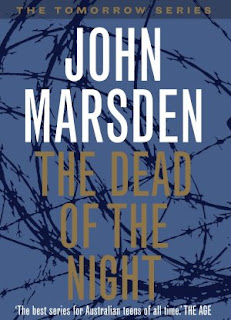 Title: The Dead Of The Night

Hell is still the safest place on earth.

When you've run out of choices, you've only got yourself.

As war rages, as the enemy closes in, as Ellie and her friends fight for their lives, they are left with nothing.

Nothing but courage, spirit and pride.

The Dead of the Night is the second volume in the award-winning Tomorrow series.

The Dead of The Night is the second book in the Tomorrow When The War Began series and a great follow up to the first book in this YA series. While the books have been around for awhile now, the recent release of the movies, Tomorrow When The War Began in 2010 has seen the series published again. It is quite surprising that it has taken seventeen years for this series to become a hit as it is a great story.

The story has been set in book one, with Australia under enemy occupation and a bunch of teenagers are trying their best to survive and do what they can to fight the invaders. After the bittersweet victory in the first series, the group is disheartened and wondering what happened to Corrie and Kevin. They set about finding out if they are alive, especially Corrie, who was critically injured in book one.

As with many war time situations, the group find another bunch of rebels and conflict occurs with them rather than uniting and becoming stronger.

This second book is a great sequel to the first book and extremely easy to read.
Posted by Scott Wilson at 2:46 AM